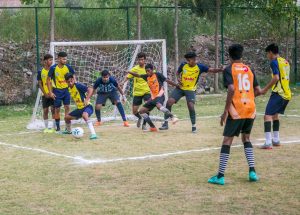 The Chandigarh Youth League (CYL – 2019) reaches towards its final act, the build up to climax is bet to leave you onto the edge of your seat only to be wanting for more.

The third season of Chandigarh Youth League has entered the 11th day of the tournament with today featuring U-16, U-14 and opens category semifinals.

The Opens semifinal featured Soldier FC comfortably winning with a 3-0 margin. SSFA seniors and Mps Seniors went on to a draw of 0-0 and then to penalties. MPS seniors won the match on the basis of penalties.

The U-16 matches of semifinals both went on to a penalties where Doaba FC and Atm FC have won both the matches in penalties. Sharandeep from Doaba FC performed really well and entertained the crowd.

The U-14 matches of the semifinals, Snehal Chettri scored the winner for Atm FC and closed their spot in the finals. Soldiers FC earned a comfortable 3-0 to go to the finals.

Finals of the Chandigarh Youth League 2019 is going to be bigger than ever and is set to take place on Friday, June 7.