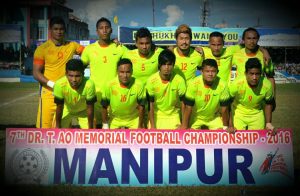 The Manipur state men’s football team lifted the Dr. T. Ao Football Trophy for the fifth time with a 4-0 final victory over Sikkim in the final of the seventh edition of the tournament at the Rajiv Gandhi Stadium in Naharlagun, Arunachal Pradesh on Sunday, October 23.

Manipur opened the scoring through Mohammed Imran Khan in the 10th minute and they went into the break with a one-nil lead. In the first 15 minutes after the break, Manipur sealed the game with N. Pritam Singh scoring twice in the 48th and 60th minute, while experienced Subhash Singam Singh scored in the 57th minute in-between.

Manipur’s N. Pritam Singh bagged the top scorer award with eight goals in the tournament while the player of the tournament award was presented to Phalguni of Manipur. The best goalkeeper award was bagged by Sikkim’s Puja Bhutia, while the Sikkim team received the fair play award.

The Dr. T. Ao Football Tournament was organised by the Arunachal Pradesh Football Association (APFA) in collaboration with Directorate of Sports, Govt of Arunachal Pradesh under the auspices of All India Football Federation and the support from the North East Council.