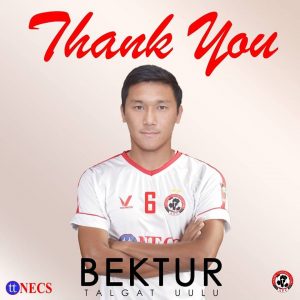 Bektur returned to FC Abdyush Ata Kant to make his senior debut for them before moving to league rivals Alga Bishkek.

In early-2017 Bektur signed for Goan I-League side Churchill Brothers SC to play 16 matches and scoring four goals in the process. After the end of the I-League he moved to Omani side Sur SC.

In early-2018 Bektur returned to Churchill Brothers for their I-League and Goa Professional League campaigns and in October 2018 made the switch to Aizawl FC to play for them in the 2018/19 I-League.

But now in the middle of the campaign both sides ended their association.

@Arunfoot
Previous VIDEO – 2019 AFC Asian Cup: All you need to know about Group A!
Next Promotion of sports amongst India’s rural youth!