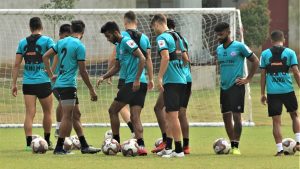 In Jamshedpur FC’s first away match of ISL-6, they travel to Kolkata to battle it out against ATK. The two sides will take the field on Saturday night at the Saltlake Stadium to lock horns with three points at stake. The visiting team will head into the fixture with an unblemished record in the league so far. Kicking off their ISL campaign with a rocky start against Kerala Blasters FC on the opening day of the season, Antonio Lopez Habas’ men will host Jamshedpur FC (with two consecutive victories) looking to sustain their recent form.

With a successful transfer window, the opponents have managed to secure the services of some quality players who have proven their worth on the field already. Since the beginning of the campaign, the likes of Roy Krishna, David Williams, Edu Garcia, Michael Soosairaj, and more have led the attack for the home side and done wonders for their team. Jamshedpur FC must keep their focus intact and have a concrete defensive plan in order to keep the star-studded forwards at bay.

Though the visitors will hold a psychological advantage over their adversaries this weekend, the competence and capabilities of the opposition must not be undermined. Jamshedpur FC must play with everything they have got to uphold their untarnished run in ISL-6 and recoup the top spot on the points table.

ATK vs Jamshedpur FC is bound to be a solid battle in the midfield with either side possessing top class armour in the form of Carl McHugh, Pronay Halder, and Javier Hernandez combating against the likes of Aitor Monroy, Piti, and Memo. For the purists of the beautiful game, we will have two high-quality teams clashing against one another, in what promises to be a competitive 90-minutes of football.