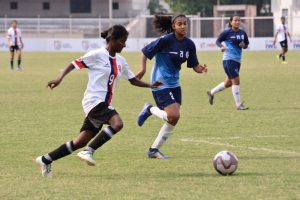 Bangalore United FC got their first win of the 2018-19 campaign as they beat Baroda Football Academy by a comfortable 2-0 margin.

Sivakumari Arumugam and Paromita Sit scored the two goals as Bengaluru waltzed to the win. Their winger Amsa got the player of the match award.

Bangalore United FC were the dominant of the two sides as they looked to keep the ball for long spells and pass it around.

Captain Amoolya Kamal was perhaps their most influential player from the middle of the park, combining well with Khushbu Kumari to form a formidable midfield partnership.

Amsa gave the two midfielders good support from the middle of the park as Amoolya and Khushbu looked to feed her the balls on the right flank.

Bangalore United FC finally got their breakthrough with a little less than 10 minutes left for the half-time whistle, when Sivasankari Arumugam gave them the lead.

The forward cut in from the left, dribbled past a couple of defenders and rifled a shot into the net from just outside the penalty area.

After the changeover, Baroda attempted to orchestrate their attacks through left winger Mona. However, Bangalore United FC pushed their defence stalwart Komal Kumari into the holding midfield position to neutralise the threat.

Bangalore United FC threw forward Paromita Sit into the mix in the second half, and she had an influence on the play, linking up with Amsa.

With a little under 10 minutes of regulation time left, Sit once again linked up with Amsa, who cut inside and layed it off for captain Amoolya. The Bangalore United FC captain’s first-time shot rattled the crossbar.

The combination finally worked out with about five minutes of regulation time left. Amsa was fed the ball on the right wing, as she dashed into the box and sent in a low cross that Sit merely had to tap into the goal from inside the six-yard-box.

With this win Bangalore United FC now move on to four points from as many games in Group II.

NNIS VIDEO: Shyam Thapa – I am what I am because of PK Banerjee!