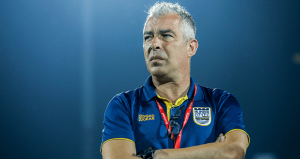 Jorge Costa, who the last two seasons coached Mumbai City FC in the Indian Super League, takes over Nzalang Nacional that had been without a coach since French coach Sebastien Migne left last June. His first competitive mission will be the 2021 Africa Cup of Nations – Cameroon qualifiers that will resume in November.

Former Portuguese international Costa (49) had previous spells in the continent. He was the coach of Gabon between 2014 and 2016, guiding them to AFCON 2015 in Equatorial Guinea. He also managed CS Sfaxien of Tunisia for a brief spell from May to June 2017.

A central defender in his playing days, Costa spent most of his career in Portugal, besides spells in England with Charlton Athletic and Belgium with Standard de Liege. He was a part of the U-20 Portugal team that won the 1991 FIFA World Youth Championship (Now FIFA U-20 World Cup) at home.

Costa’s first task with Nzalang Nacional will be against Ghana in a friendly on October 12 in Turkey. Then in November, they will face Libya in a double header of AFCON Cameroon 2021 qualifiers Group J. Equatorial Guinea currently trails the group pointless, having suffered back to back defeats against Mauritania (2-1) and Tunisia (0-1).

Meanwhile, Coaches of the U-17, U-20 and U-21 national teams have also been revealed. Juan Micha and Felipe Esono Moreno will coach the U-17 side, while the U-20s and U-21s will be led by Antoni Pancho.