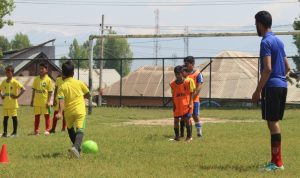 The Grassroots Coaching Course at Pattan, Jammu & Kashmir, has been rescheduled due to weather and other unavoidable circumstances.

The Grassroots Coaching Course conducted at Pattan, a remote Village of District Baramulla, which commenced from June 2, had to be stopped for one Day because of sudden declaration of Eid Festival on June 5. As such it concluded on June 6 with a one-day break.

It was conducted by Intikhab Alam and was coordinated by Bilal Ahmad Panjabi, Development Officer of Jammu & Kashmir. 21 Candidates, mostly from remote areas of the Baramulla district attended the course, which proved very successful.