Home / International Football / Asia / India U-23 gear up to face Qatar U-23 in a friendly match! 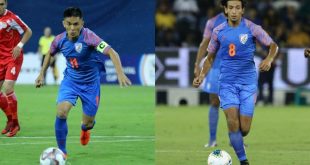 A day prior to taking on Qatar in a friendly match, India U-23 Coach Derrick Pereira labelled the match as “a perfect opportunity to gauge ourselves before the qualifiers.”

The match is part of India U-23’s preparation for the forthcoming AFC U-23 Qualifiers slated to be held in Tashkent, Uzbekistan from March 22 where India have been clubbed with hosts Uzbekistan and Tajikistan.

“The match against Qatar provides us the opportunity to get a fair idea of where we stand, and where we need to work on. The focus will be more on finding the right combinations, and style of play,” Pereira maintained.

The match will kick-off at 9.30pm IST at the Aspire Academy ground and will be streamed live on Indian Football Official Facebook page.

Pereira, a former India International has been working relentlessly on the fitness as it’s going to be one of the crucial factors to churn out a result.

“Fitness is one part that carries paramount importance in modern football. We have to sustain 90 minutes on the pitch, both on the attacking and the defensive front. Joel (Carter) is doing a good job and he brings in experiences of working in the Senior Team. He’s helping the boys stay on good shape,” he stated.

Meanwhile, the trio of Lallianzuala Chhangte, Sarthak Golui and Vinit Rai could not resist themselves from lamenting the slender solitary goal loss to Qatar in the 2018 AFC U-23 Championship qualifiers.

“I still remember the day. Although they were attacking vigorously, we were able to stave off the danger. We had our chances to equalise but we didn’t take our chances. I think it was not a game that we deserved to lose,” Sarthak Golui recalled with a heavy heart.

Almoez Ali, who hadn’t come into the limelight till then, had netted the only goal to break Indian hearts on that day.

The fact that this Qatar side is going to be the ‘nucleus’ of their 2022 FIFA World Cup team puts more value on the match according to Pereira.

“The match is going to be a tough one for us, hands down. They are the current Asian champions, and for a reason. Some of the members of the U-23 squad have already played in the Asian Cup and most importantly, they will be the nucleus of their 2022 World Cup squad. They are a side who are technically and tactically very strong and we have to be absolutely on our toes throughout,” he explained.

Winger Lallianzuala Chhangte added, “It provides us with added motivation to play against a higher-ranked team. Especially, when it comes to playing against Qatar, who are the champions of Asia, it pushes us to give more on the field to get the result.”

“Qatar are a team who loves to attack. We had seen it in the qualifiers and now everyone is aware of their capability. The match is going to be a challenging one for us but we’re here to fight, and we’ll do it till the final whistle,” a determined Vinit Rai echoed the sentiment of the squad.