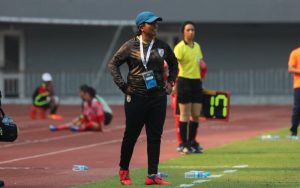 Indian Women’s National Team Head Coach Maymol Rocky addressed participants on the second day of the ongoing International Virtual Coaching Conference organized by the All India Football Federation (AIFF), speaking on the topic ‘Women’s Football In India’ – where she talked about the progress made by the Indian Senior National Team and the Women’s game in general over the last two years.

“Our journey has just started,” Maymol, who was appointed as the Head Coach in 2017, declared, before adding: “Thanks to the increased support from the AIFF and Government of India the women’s team has made tremendous progress in the last two years. We made plans – both short and long-term – for which we have received the best possible backing in every way.”

In November 2018, the Indian Women’s National Team created history by making it through to the second round of the Olympic qualifiers for the first time in their history. Terming the success as a “turning point”, Maymol talked about the increased number of matches and tournaments played by her side in 2019 and the positive impact it has had.

“Since the last two years, we have built a strong unit, with a majority of players being very young. We have got a lot of exposure — more camps, more matches and more preparation time. We have played many competitive matches against higher-ranked oppositions. None of the players had played as many games as they did in 2019,” Maymol informed.

“Our first camp was almost four months long and we were provided with all the necessary facilities and equipment, such as good hotel stay, good training pitch and specially-designed kits for women players.”

Maymol spoke in detail about the number of matches played by the team against a number of quality teams — beginning with friendlies against Hong Kong and Indonesia at the start of 2019, which saw India register four wins out of four. It was followed by hosting the four-nation Hero Gold Cup in Bhubaneswar and a tournament in Turkey, which included a match against Romania — after which the team received a “big boost in confidence”, according to the head coach.

In March, India were crowned SAFF Champions for the fifth time running, defeating hosts Nepal 3-1 in a tense final and came close to getting past the second round of the Olympic qualifiers, as they lost out on goal difference to Myanmar despite an unbeaten campaign with two wins and a draw.

After that, they finished second runners-up at the COTIF Cup in Spain and played two away friendlies each against higher-ranked Uzbekistan and Vietnam, after which they successfully defended their South Asian Games gold medal again in Nepal. 2019 also saw them jump up the ranking charts to a FIFA Ranking of 57, which improved to 55 in March 2020 as well.

The head coach also highlighted the recent winners of the AIFF Awards, which highlights the young core of the squad — with the team’s sights set on the upcoming AFC Women’s Asian Cup 2022, which will be hosted in India.

“The AIFF Awards are a big motivation for the girls, with Sanju Yadav and Ratanbala Devi winning the Player of the Year and Emerging Player of the Year awards respectively. The entire squad average age is 21 and I have only three senior players in the team. The rest are all young. Now, we are working for a long-term plan for the 2022 AFC Women’s Championship as we move forward together.”

LEARNING FROM THE JAPANESE MODEL

With women’s football being the central theme, the day also witnessed a presentation by Japanese U-18 Women’s Team Assistant Coach Yuiko Konno about ‘Pathway to reach the top & steps taken to sustain’ by the Japan Football Association with respect to women’s football.

Japan remains the only nation to win the FIFA Women’s World Cup in all three categories and Yuiko, who is also the Head Coach of the Japan U-15 talked about the system followed in the nation to develop the women’s game at the grassroots level.

“Talking about how the Japan National Team reached the top and sustain its position, there is no magic formula or secret. What we have been doing is very simple,” she said, before highlighting the four factors of their development plan — player development, national team, coach education and grassroots football.

“We place significant emphasis on these four factors. They are closely related to each other and we always think of them as one unit.”

Despite a relatively small number of young girls taking up football in school in Japan, the team has achieved tremendous success at the world stage. A key reason behind it, as explained by Yuiko is, the JFA Declaration made in 2005.

“The JFA Declaration was announced in 2005 sharing the basic philosophy and vision of Japan’s football. Based upon this declaration, the Nadeshiko vision was formed, under which Japan aspired to become a world-class country in football.

“It features three major objectives — football to be closely accessible for women, the women’s national team to continue being a top-class National team in the world and helping players develop their individual quality to measure up to global standards,” she explained.

Yuiko informed about the role played by the National Training Centres (NTC) and the development plan, which is based on technical analysis of world competitions and subsequent technical reports and feedback.

Highlighting the player development programme she described the various age groups in which players are selected and teams are prepared which includes an elite programme for U-13 and U-14 girls, a special camp for goalkeepers and the three JFA elite academies in Japan — in Fukushima, Imabrai and Sakai.

“In coach education, there is a lot of room for improvement. We currently have only 8 S-Licence female coaches and the JFA is trying very hard to increase the number. They have newly started the Associate Pro License for women’s coaches, in view of the upcoming WE League in 2021 — to empower women’s football and encourage teams to have female coaches and staff in it,” she stated.

A walk down memory lane; a tryst with Durand Cup legends. Durand Diaries present up …