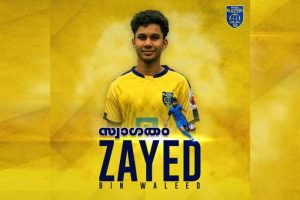 Zayed Bin Waleed spent most of his childhood in Abu Dhabi, where he played for UAE-based Manchester United Soccer School and Manchester City School of Football before moving on to the Al Ethihad Sports Academy, where Zayed played with the ISL Emerging Player of the 2018-19 season, Sahal Abdul Samad and they are set to reunite at the Kerala Blasters.

Zayed is expected to arrive at Kerala Blasters for their 2019/20 pre-season training later in the year.

The Club is delighted to announce that Zayed Bin Waleed is now a Blaster!

Having previously played for the Du LaLiga HPC U-18 Team in UAE, the 17 yr old Calicut born midfielder joins us for the upcoming 2019/20 Season. #SwagathamZayed #KeralaBlasters pic.twitter.com/MT86O9BlES