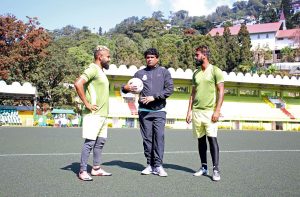 Mohammedan Sporting Club technical director Dipendu Biswas says tomorrow’s final of the 39th Sikkim Governor’s Gold Cup at the Paljor Stadium will be tough but stressed that the Black Panthers have prepared well to soar over Sikkim Himalayan FC.

Sikkim Himalayan FC, who reached their maiden Gold Cup final, will compete against a side that has been there 9 times before – and successful 2 of them.

Sikkim Himalayan are the only second club from the state to reach the Gold Cup final after GMC Gangtok beat BSF Kadamtala to clinch the title in the inaugural edition of the competition in 1979.

“Final is about small details. There’s stress and pressure, and these details make the difference. It will be premature to say how we would approach the match but I can say it will be a good game.” Biswas said.

Biswas continued, “We will play our normal game but bearing in mind that the most important thing for us is not to concede. Keeping things tight at the back will be important.”

According to Biswas his side will strike a balance between offensive and defensive play but will definitely take the game to the opposition and continue with the style and combinations that has served the side well so far.

“Sikkim Himalayan is a good team and I think we need to improve our game as we have shown throughout the Calcutta Football League. I completely trust my players and hopefully they will again execute the game plan the coaching staff will set like they have done so well so far,” Biswas added.

Though it may appear that Mohammedan Sporting have an excellent pedigree to go the distance, but they have to topple a Sikkim Himalayan side that have grown stronger and stronger as the tournament has progressed.

“We have a lot of respect for Sikkim Himalayan and their football but we are ready to face them. l have been working on my team and concentrating on what we need to do to win. We have our destiny in our own hands and I believe we can win this tournament. We are capable, we have what it takes to win,” he added.

Despite creating plenty of goal-scoring opportunities the Black Panthers have often struggled with their finishing and Biswas feels the likes of Charles Atcha and Sarra Camara need to be more clinical in attacking third given a draw will go straight to penalties.

The pressure will be very much on Mohammedan Sporting to clinch the first silverware of the season. Sikkim Himalayan FC, on the other hand, have exceeded many people’s expectations by reaching this stage and they have a side that is more than capable of pressing for the title, and with so much riding on the outcome, tomorrow’s meeting is sure to be an absorbing affair which will kick-off at 1:30pm.