Narrow defeat for Chennaiyin FC B against Kerala Blasters Reserves! 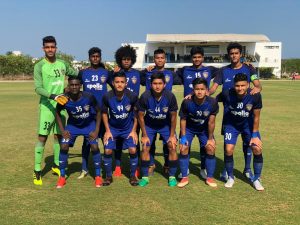 After three draws and four defeats so far, Chennaiyin FC B will aim to finish with a win when they face Fateh Hyderabad AFC in their final Group B fixture in the Second Division League on Tuesday, March 26 at the SSN College Ground.

Chennaiyin FC B made five changes to the side that had lost 0-3 to Ozone FC in their previous game. Goalkeeper Samik Mitra replaced B.Y. Revanth as Harsh Bartwal came in for Joseph Lalsanglura in defence. Hendry Antonay also started as Joysana Singh made way. In midfield, Vijay Thangavel started in place of Zonunmawia as Syed Suhail Pasha replaced Bawlte Rohmingthanga upfront.

Chennaiyin FC began brightly and had a good chance in the opening ten minutes. Striker Krishna Pandit received the ball at the edge of the Kerala Blasters box, but did not make the most of the promising position he found himself in.

Kerala Blasters went on to dominate proceedings in the first half thereafter as Prabin Tigga and Hendry Antonay impressed for Chennaiyin FC in defence. But there was nothing they could do on 39 minutes, when a long-range attempt from Pragyan Gogoi caught out Samik Mitra in goal and went into the top corner.

The Kerala Blasters reserves had a couple of decent opportunities in the opening stages of the second half to double their lead. The play was more end-to-end at this point, as Chennaiyin FC tried to draw level on the break.

From one such chance, Chennaiyin FC were in a 2v2 position on the counter. But Krishna’s final pass in the Kerala Blasters box was found lacking and the chance was gone.

Bawlte Rohmingthanga, who had come on for Harsh, had a glorious chance to draw level soon after. With just the keeper to beat, he opted to pass to fellow second-half substitute Lalliansanga Renthlei, but the pass was unfortunately astray.

Aman Chetri then had a chance but his shot went just above the post as the elusive equalizer continued to elude Chennaiyin FC. In the closing stages, Rohmingthanga’s free-kick for Chennaiyin FC from 20 yards out went straight to the Kerala Blasters goalkeeper as the visitors held on for a narrow 1-0 win.