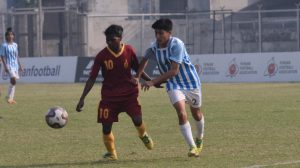 Deep inside a village in the Dumka district of Jharkhand, there once was a little girl who would dribble her way round the paddy fields with a makeshift football made out of cloth at her feet.

The region itself was listed as one of the 250 most backward districts in the entire country according to a census by the Indian Government in 2006, and receives aid from the Backward Regions Grant Fund Programme.

The aforementioned little girl – Dular Marandi – now a 23-year-old top flight footballer in the Indian Women’s League side SSB Women Football Club, herself accepts the fact that the kids in her village did not know much about the ‘beautiful game’ except perhaps the way it is played.

Having shown some promise in the game, however, Dular was soon asked to join a football coaching centre, where she received training and soon progressed to play for her district and then the state of Jharkhand. The young striker has already represented her state five times now.

AN ADOLESCENCE SHROUDED BY DARK CLOUDS

While Dular was still learning her trade at her local football coaching centre, tragedy struck her household – he mother passed away. Dular was just 13. Five years later, her father passed away too.

Dular was left with her two younger brothers, and quite bewildered. Eventually, they moved to their aunt’s place.

“This was the turning point in my life. It was then that I decided that I needed to concentrate on my football, and try and earn a living that would help support both my brothers,” said Dular. Her two brothers have since then, had to leave studies and have been working at local farms to earn a living.

“I knew I needed to do well at that point, so I continued to study and persisted on my dream to play football,” she said.

While she struggled in her late teens after her father’s death, Dular’s dark clouds finally got the silver lining it deserved in 2017, when she got a job in the armed border force known as the Shastra Seema Bal, thanks to her footballing exploits for Jharkhand.

“It was such a happy moment for me back then. I could finally give some support to by two brothers. Not only them, but I could now also support my aunt who has helped us in every way imaginable back in those tough days,” she said.

“But what made me even happier back then was the fact that all those years of toil and hard work finally paid off,” said Dular. “It is as they say in Hindi – Mehnat ka phal meetha hota hai (sweet are the fruits of labour).”

Once she joined SSB, Dular Marandi has never looked back, and has progressed step-by-step. Now playing in the top-flight of women’s football in India, the 23-year-old has had to take up a lifestyle that she perhaps would never have otherwise imagined.

“Everything is properly regulated now at SSB. From tactical training to coaching, and right down to our sleep timings and the food we eat,” said Dular. “This has only helped us improve our fitness and perform better on the field.”

The young striker also looks up to her SSB teammate and India international Sangita Basfore, who has played an influential role for the Siliguri-based side in the IWL so far.

“Sangita may be young, but she has already learnt so much in the National Camps. She’s always giving us small tips during training,” explained Dular.

“She herself is very fit, and never seems to run out of breath,” she laughed. “She just keeps running up and down the pitch. That also motivates us to perform better when the chips are down.”