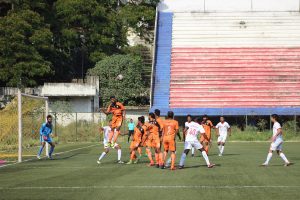 South United FC looked hungry for a win in their last outing of the Second Division League and would take the lead on two occasions but were dragged back by a resilient Ozone FC.

Ozone FC started the game with a series of long throw-ins to test the SUFC defence but they proved to be difficult to penetrate. The visiting side were persistent and proving to be a thorn in South United FC’s side especially from set pieces.

Ozone FC kept South United FC pegged back but were unable to really test the defence in any of the attacking spells. South United FC had most of their chances on the break testing the keeper on a couple of occasions before they broke the deadlock in the 32nd minute. Krishan’s corner landed at Rungsing’s feet and the striker rolled the ball home from a few yards away.

Ozone FC looked filled with purpose after conceding the goal but South United FC’s pressing and closing down forced mistakes out of them and they were unable to find a way through the defensive block of South United FC.

With only the second chance they created in the second half, Ozone FC were able to equalise in the 55th minute as Harpreet Kumar was allowed to run unchecked from deep. He found himself unmarked in the box and slotted his shot just inside the far post going across the keeper.

The home side created more and more dangerous chances now in pursuit of victory. Cletus and Aaron would both have chances before the introduction of Sudipta. The diminutive winger injected a spark in South United FC’s attack.

A sublime move in the 68th minute from South United FC that released Aaron down the right flank for South United FC ended in him squaring it off to Sudipta who didn’t miss from 2 yards out to give his side the lead once again.

South United FC followed up the second goal with some good play, winning the ball high up the pitch and running at the Ozone defence and it looked for a few minutes that they were going to seal their victory before a defensive mix-up in the 82nd minute led to Krishanu heading the ball into his own net to bring the teams back on level terms.