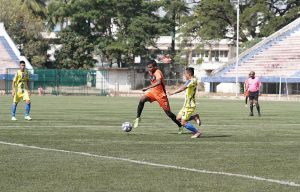 Both sides could’ve swung the game in their favour but neither could find the quality in the final third to finish off the opponent. While South United FC threw all they had forward to win the game, Jotin Singh carried ASC’s attack almost on his own.

The disciplined ASC defence stood firm early on while Jotin Singh provided most of the forward impetus for ASC in the early minutes of the game. Their efforts paid off in the 24th minute when the usual suspect Jotin Singh netted in the 24th minute to put ASC ahead. South United Fc made plenty of forays forward without troubling the goalkeeper too much.

A good five-minute spell for South United FC meant that they had ASC pinned in their own box clearing crosses and blocking shots for a while. It paid off for them as Krishanu arrowed in his throw to Vikram’s feet, as the forward turned in the box he was brought down by an ASC defender and the referee pointed to the spot almost immediately. Lalnunsiama smashed the ball past the keeper to equalise for South United FC.

The second half began with ASC taking the lead in attack and having a few early pops at goal but none that concerned Royal seriously. It was South United FC’s Jaison who had the best chance of the half as a measured pass put him one-on-one with the goalkeeper but his attempt at the chip only found the keeper’s chest.

Jotin Singh would go close on many occasions in the second half but two times in particular, the first with a shot from range that Royal expertly lifted over the bar, and the second from a free-kick that struck the crossbar.

A chance to land a hammer blow also fell to South United FC when Sudipta’s flat cross whizzed past the goal, but Vikram couldn’t get his head to it in time.