UEFA supports Play True Day – and emphasises its commitment to clean sport free of doping, which was held on Wednesday, April 10, 2019.

What is Play True Day?

Play True Day – a grassroots movement endorsed by the World Anti-Doping Agency (WADA) – is dedicated to clean sport and is intended to raise awareness among athletes, the sporting public and others about the global fight against doping.

UEFA, recognised as one of the world’s leading team-sport organisations in the fight against doping, joins WADA, other national and international sports federations, anti-doping organisations, major event organisers and educational institutions across the world in backing Play True Day and showing commitment to clean sport.

Any player participating in a UEFA competition may be required to undergo a doping control at any time.

Doping controls may include samples of blood and urine, as well as screening for substances such as EPO and human growth hormone. No advance information is given as to when controls will take place – they can either be in-competition (after a match) or out-of-competition (at a team training session, or even at players’ homes).

Players are selected by random draw or are targeted by UEFA

Then, the players are chaperoned to the Doping Control Station (DCS), a secure room close to the tunnel

They rehydrate until they are ready to provide a sample

The player splits their sample into the A and B bottles

The urine is tested to make that it is not too diluted to analyse. If it is too dilute, the player has to give a second sample

Sometimes, players have to also provide a blood sample

Samples are sent to a WADA Accredited Lab for analysis

UEFA – at the forefront of sport’s anti-doping campaign

UEFA continually strives to ensure that its education and testing programmes remain at the cutting edge of science and recognised good practice in all areas of prevention and detection.

UEFA’s doping controls are all conducted by UEFA’s own doping control officers (DCOs), a group of 58 medical doctors from 29 different countries

To illustrate the breadth of UEFA’s testing work, a total of 2,800 samples were collected across all UEFA competitions in the 2017/18 season, with 32% of them (895 samples) collected out-of-competition. Three in-competition cases brought sanctions: Octopamine (specified stimulant), Methlyphenidate (specified stimulant) and Prednisone/Prednisolone (glucocorticoid). In addition, 1,508 samples were tested for ESA (Erythropoiesis-stimulating agents) – substances that stimulate the bone marrow in order to make more red blood cells – and none of them returned positive.

A key part of UEFA’s testing strategy is the athlete biological passport. UEFA runs both blood and steroidal passport programmes. These monitor players’ biomarkers, in blood and urine, over time; variations in either the blood or steroid profile may be indications of doping, as well as providing intelligence for target testing.

UEFA stores all samples collected in the UEFA Champions League, UEFA Europa League, UEFA Super Cup and UEFA European Championship for up to ten years in order to allow re-analysis at any time – providing a significant deterrent effect.

In addition to in- and out-of competition testing of players across its various competitions, UEFA also runs a comprehensive education and awareness programme which aims to warn players, especially youngsters, about the dangers of doping not only for their health, but also for their careers.

“UEFA is dedicated to protecting the integrity of our competitions and the right of our players to participate in a doping-free environment,” he said.

“Our comprehensive testing, education and awareness programmes are considered as models of good practice, and have helped place us at the forefront of this crucial global campaign.

“UEFA is pleased to support Play True Day and join other organisations in backing the worldwide drive to promote clean sport. I call on football players everywhere to respect and adhere to our key belief that doping can have no place in our game.” 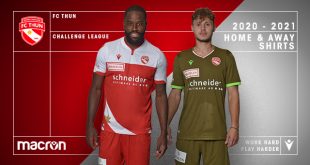 FC Thun, the team that plays in the Swiss Challenge League and is based in …