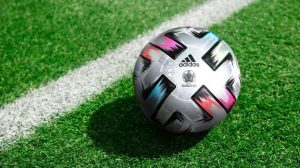 adidas has today revealed the UNIFORIA FINALE, the official match ball for the semifinals and final of UEFA EURO 2020.

Extra details have been added to the ball in order to celebrate the location and the importance of the final three matches in the tournament, while also ensuring that the ball stands out on the field of play.

These include watermark details of Wembley Stadium – where the semifinals and final will be played, as well as an extra white print for a light appearance.

These features are contrasted with signal green, red, cyan and pink brushstrokes, inspired by iconic London symbols and traditional colours that sit against a dark background which represents the London sky at night.

Previous The Stripes of old are revived by Nike in Atletico Madrid home kit!
Next Latest update on the AFC National Team Competitions in 2021 and 2022!