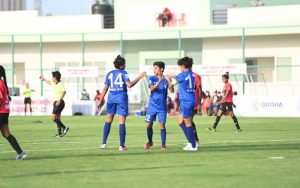 ARA FC takes home full points after an emphatic 0-4 win against Mata Rukmani FC today in the Indian Women’s League. The Gujarat side registered their third win this season.

The game started with ARA FC dominating from the very first minute as they kept on creating chances. Mata Rukmani came up with good defensive composure and they kept things at bay.

Finally, in the 16th minute, the deadlock was broken with Kiran finding the net from the edge of the box with a sublime finish. Thereafter ARA FC took the momentum by their side and Mata Rukmani FC suffered from the high pressing game from the visitors.

Though ARA FC created a lot of chances yet they lacked vehemently in the attacking third as they failed to find the target.

At last at the stroke of the half-time, in the 45+3 minute, Madhubala scored from Nisha’s accurate cross to double the lead for ARA FC.

Going into the breather ARA FC maintained a comfortable 0-2 lead.

In the second half, ARA FC made a quick comfortable start as they increased the lead to 0-3 within the 58th minute. With Manisha scoring from the edge of the box.

It was all ARA FC for the best part of the game. Anju scored the winner in the 78th minute from a very tight angle to increase the lead to 0-4 for ARA FC as they kept on their dominating display.