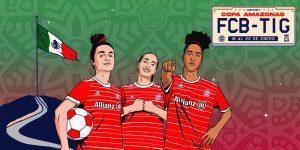 After an intensive and successful winter training camp, it’s onto Mexico for the FC Bayern Women on Tuesday night. Head coach Alexander Straus’ side will be continuing their preparations for the second half of the season in Monterrey from January 17 to 23, including a friendly against Mexican champions Tigres Femenil on Saturday, January 21. Kick-off at the Estadio Universitario is at midnight German time.

As well as various training sessions and a team event, FCB Women will get to test themselves against the Amazonas in Monterrey. Tigres Femenil have won five titles in the last five years. Only in November, the team from San Nicolás de los Garza won the league title in Mexico and were recognised as ‘CONCACAF’s Top Women’s Team’ last year.

On top of that, the club promotes the development of women’s football with numerous initiatives. Bianca Rech, FC Bayern Women sporting director, said, “We’re very much looking forward to this great opportunity to advance the development of women’s football together with Tigres Femenil. The trip will be a valuable experience for our team. FC Bayern have a lot of fans in Mexico and across Latin America, so we’re very happy that we get to present ourselves there in this game.”