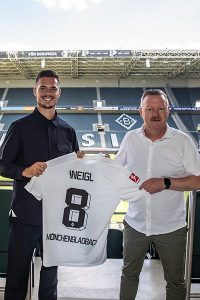 Borussia Mönchengladbach sign Germany international midfielder Julian Weigl on loan until the end of the 2022/23 season.

“Julian is a very strong and assured player,” said Borussia sporting director Roland Virkus on the 26-year-old, who has six caps for Germany. “He brings a lot of Bundesliga experience and footballing quality with him, and he will certainly be able to help our team right away.”

Julian Weigl, who will wear the number 8 on his Borussia shirt, came through in 1860 Munich’s academy. At 18, he signed his first professional deal, and was for a while captain of the Löwen as they played in the 2. Bundesliga. After 40 competitive appearances in Munich, the midfielder moved to Borussia Dortmund, with whom he won the DFB-Pokal and the Supercup. Weigl played a total of 171 competitive games for Dortmund, scoring four goals.

In January 2020, Weigl made the move to Portugal and joined Benfica where he immediately became a regular fixture in the side. He was voted the fans’ player of the season in 2020/21. He played 115 competitive games for the side, scoring four times, and has six senior Germany caps. He also also has five Germany U21s appearances to his name, along with seven for the U20s and four for the U19s.