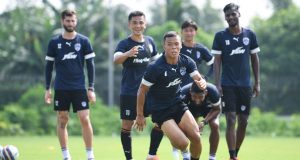 Bengaluru FC head coach Simon Grayson said that his side would aim to finish with three points in their Durand Cup 2022 Group A encounter against Mohammedan Sporting Club at the Saltlake Stadium in Kolkata on Friday. The Blues, who qualified for the quarterfinal of the competition with a 2-2 draw against FC Goa on Tuesday, have seven points from three games while Mohammedan Sporting have nine.

“I’ve said from day one of the competition that we want to finish top of the group and win as many matches as possible. If anything, it gives us more motivation to win the next game again because of the draw against FC Goa. We want to build that winning mentality within the team, and that hasn’t changed,” said Grayson ahead of the encounter.

Mohammedan Sporting began their campaign with a 3-1 win over FC Goa, before a convincing 3-0 defeat of Jamshedpur FC. Andrey Chernyshov’s side kept their all-win record intact with a 2-0 win over Indian Air Force FT. Striker Faslu Rahman is the Kolkata side’s top scorer in the tournament with two goals, while Blues’ skipper Sunil Chhetri has three goals to his name.

“I’ve watched Mohammedan (Sporting) in action a couple of times at the stadium and I’m aware that they’re a local side. I’m sure there will be a good atmosphere with a big crowd, so we know it’s going to be a tough game for us. But it’s another one that we’re looking forward to and another step in terms of our development as a group. Overall, it’s another good competitive game for us,” added Grayson.

Bengaluru FC welcomed Spaniard Javi Hernandez, who made his debut off the bench on Tuesday, along with Jayesh Rane, who also made a return from a brief spell on the sidelines. Grayson confirmed that the Blues are assessing the fitness of Congolese striker Prince Ibara, who picked up an injury against FC Goa and his inclusion in the squad will be a late call.

“Javi and Jayesh responded well from being out injured and got some time on the pitch last time. Prince got injured, which wasn’t ideal. It’s a muscle injury and we’re not sure about how long he will need. We’re hopeful of having him back in the squad as soon as possible,” added Grayson.

Depending on the result in Kolkata on Friday, the Blues will face one of Kerala Blasters or Odisha FC in the Durand Cup quarterfinal. Kick-off at the Saltlake Stadium is scheduled for 6 pm and will be telecast on the Sports18 network, with live streaming on VOOT Select and JioTV.