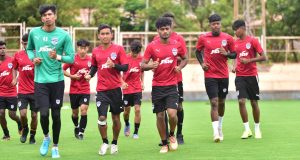 Bengaluru FC Head of Youth Development and Head Coach of the club’s ‘B’ Team Jan van Loon announced his squad for the upcoming BDFA Super Division League campaign, set to begin with a clash against Young Challengers in Bengaluru. The Blue Colts’ first encounter is scheduled to take place on August 27 at 12pm at the Bangalore Football Stadium.

“In the little time that I’ve been with these players, I have seen improvement and that is a positive I want to build on. After a semifinal exit in the Puttaiah Memorial Cup, I am sure that these boys want to prove a point in the BDFA Super Division League. They have been training well and working as a unit. I’m excited to see how they perform in a longer competition,” said van Loon.

The BDFA Super Division has as many as 20 teams participating in this edition, with games set to be played out in a single-legged format at the Bangalore Football Stadium. FC Bengaluru United are the defending champions, and currently sit on top of the table with a massive 17-0 victory on the opening day against Jawahar Union FC.

The Blue Colts will look to bounce back in the tournament following a disappointing exit at the semifinal stage of the Puttaiah Memorial Cup, with a penalty shootout loss against Bangalore Eagles. Bengaluru FC B had previously been in action at the PL NextGen Cup in the UK, where they faced the youth teams of Premier League sides Leicester City FC and Nottingham Forest.

The Blue Colts finished in fourth place in the previous edition of the Super Division, behind FC Bengaluru United, Kickstart FC and Bangalore Eagles. Bengaluru FC have won the BDFA Super Division twice, first in 2018-19 and again in 2019-20.