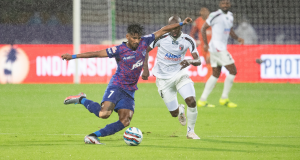 Bengaluru FC battled torrential rain and a strong challenge from NorthEast United FC to run out 4-2 winners over Khalid Jamil’s side, in their 2021-22 Indian Super League opener at the GMC Athletic Stadium in Bambolim. Having scored twice to be pegged back by the Highlanders, the Blues then found the net two more times to no response, coming out trumps in what was Head Coach Marco Pezzaiuoli’s first Indian Super League game in charge of the side.

The Blues took the lead in the 14th minute through Cleiton Silva, who managed to break the NorthEast United backline and round Subhashish Roy Choudhary, before slotting home to give Bengaluru the lead. Only moments later, the Highlanders restored parity when Deshorn Brown latched onto a pass from Suhair Vadakkepeedika and squeezed his shot past Gurpreet Singh Sandhu.

A combination of good luck and misfortune gave Bengaluru the lead again when Ashique Kuruniyan’s attempted cross was miscued and came back into play off the crossbar. Udanta’s shot on the rebound was saved on the line by Choudhary, who had recovered well, only for Mashoor Shereef to hack into his own net.

NorthEast regrouped once again and attacked the Blues down the left, with Vadakkepeedika in the thick of things. The winger’s cross was intercepted by Ashique, but fell kindly for Martiniquais striker Mathias Coureur, who poked his shot past a hapless Gurpreet once again.

The Blues regrouped and took the lead once again, scoring their third through Jayesh Rane. The midfielder, who had previously scored on his AFC Cup debut for the Blues, found the net after a rasping drive from outside the box to give Pezzaiuoli’s side the lead heading into the break.

Pezzaiuoli rang in two changes just past the hour mark, bringing on Leon Augustine and Pratik Chaudhari in place of Udanta and Musavu-King. Shortly after, the German-Italian was forced into another change when Gurjinder’s late tackle on Leon left the winger unable to continue.

Ibara’s first involvement came with the Congolese through on goal, but the referee’s assistant had his flag up for offside, although replays showed the striker was in line. Ibara, however, found the net moments later when he ran onto a pass from Costa and turned in to shoot through the legs of NorthEast defender Jestin George and leave Subhashish wrong-footed.

The Blues saw out the rest of the game in what were torrid conditions, joining ATK Mohun Bagan at the top of the table. Bengaluru next face Odisha FC, on November 24 at the Tilak Maidan. 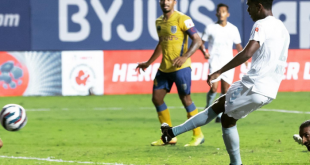