Bengaluru FC’s Eugeneson Lyngdoh: Winning the Federation Cup will be icing on the Cake!

Arunava Chaudhuri 2016-04-30 I-League, Super Cup Comments Off on Bengaluru FC’s Eugeneson Lyngdoh: Winning the Federation Cup will be icing on the Cake! 2,185 Views 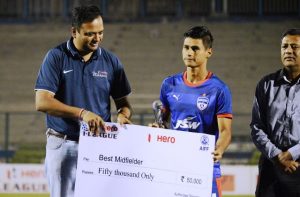 Awards and accolades are now becoming synonymous with 2015 AIFF Player of the Year Eugeneson Lyngdoh. The Engineering dropout was handpicked by Ashley Westwood two years back and since then, it has been a ‘fairy tale’ for him. A day prior to Bengaluru FC’s opener in Hero Federation Cup, Lyngdoh spoke at length to www.i-league.org about his journey so far, his Club environment, his commitment for the National Team, the Federation Cup and much more.

You recently won your first Hero I-League Trophy with Bengaluru FC. How do you define that?

For most of my teammates this has been the second I-League Trophy but for me, it’s the first one. The euphoria is just unmatchable – it’s the Premier Award of Indian Football. Being a Footballer you’ll always push your limits to win something, to achieve more. Winning the Hero I-League with Bengaluru FC has been always the top priority and by God’s grace, we have achieved it.

Is the tag of ‘Defending Champions’ bothering you ahead of the forthcoming Hero Federation Cup?

Not really! At the end of the day one Team will win while others will not. It was our Team effort which helped us win the Federation Cup last time. But every Tournament starts from the scratch and we have to put more effort to get the job done. We have to start from zero and we’re ready to do that. If we can follow our Hero I-League triumph with a triumph in the Hero Federation Cup, it’ll be nothing less than the icing on the cake.

Once you came back after the prolonged injury the Blues looked a completely different outfit. How much does Bengaluru FC bank on Eugeneson Lyngdoh?

I don’t prefer to look at it from that angle. We have more than one talented Player in every position and everyone is ready to fill in anyone’s shoes. In the AFC Cup tie against Ayeyawady United, the Gaffer put in youngsters and they carried out their job immaculately. Whoever has been put in on a given day has delivered on the pitch. Had that not happened, the Hero I-League would have eluded us again. Our Team hit the right chord at the right time.

You are now the proud owner of the ‘Best Midfielder of Hero I-League’ for two consecutive years. Has it sunk in?

Obviously I feel on top of the World having won the Award for two years on the trot. But the entire credit goes to the Bengaluru FC support staff. They pulled through a humongous task to keep all of us fit. Even during my rehab they worked tirelessly to bring me back on the pitch.

Our Gaffer is an outright technical bloke and he always inspires us to try something new on the pitch. It’s because of the Team effort we are here. That’s the unheard anecdote of the Blues, the strong bonding. No matter what happens, we always have our dinner together. There lies the foundation of Bengaluru FC.

Engineering dropout to Football, 2015 AIFF Player of the Year, Best Midfielder Award for two consecutive Years and representing the Indian National Team — how do you see your journey so far?

(Grins) It has been a fairytale for me — a dream come true situation. I have always fancied playing Football but never got the opportunity. Finally, when it came I couldn’t afford to let the opportunity go and grabbed it with both hands.

Rangdajied United to Bengaluru FC — how do you see this transfer in terms of your career?

The most important one, I must admit. At that moment Bengaluru FC had already triumphed in the I-League in their inaugural season. Being called by the Champion club and donning their colour was something beyond my dream. I’ll always cherish that moment. Now winning the League with them is enigmatic. The day will always be etched in my memory.

You have ticked off almost every box till now. What’s next for you?

As my personal goal I’ll push myself harder to play a part in the upcoming National Team fixtures so that we can qualify for the AFC Asian Cup. We all are striving to seal a berth in the AFC Asian Cup, that’s the biggest thing coming up.

Where do see yourself after five years?

I always cherished the moment when I could take up Football in my life. I always believe that you would put more than cent percent if you pursue your dream, your passion. I want to be a person to be looked upon so that youngsters could dare to live their dream, their passion. There’s nothing in being laid-back and let others go, there might be roadblocks on your pathway but eventually when you scale the height, you would feel it. I would be elated if I could inspire even one of the thousands of the youngsters in our Country, grinding a self-belief within them.