Blue Tigers in unison, Job not yet done as focus shifts to match against Hong Kong! 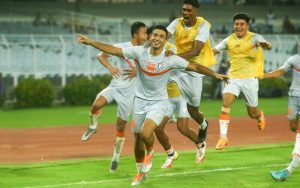 Some 30 minutes to midnight, even as the horde of fans waved at the Team Bus of the Indian National Team post India’s 2-1 victory against Afghanistan at the Saltlake Stadium, the Blue Tigers weren’t at all willing to take things for granted.

“We don’t need to look at other groups, and other teams. Calculations can wait. We have our last match against Hong Kong, and we will go all out for a win,” stayed the sentiment.

The morning after, it’s the same routine for the footballers – a recovery session at the gym, and then at the pool; and there’s also an evening practice session for all players who did not start in the match against Afghanistan.

The day coincided with talismanic skipper Sunil Chhetri completing 17 years in international football, an inspiration to every Blue Tiger, as much as it is to every sporting fan.

The sentiment in the camp also revolved around the team spirit, the attitude on the pitch, and contribution coming in from every player, and member of the staff with vociferous backing from the passionate Kolkata fans.

“It feels great to celebrate my 17th year in international football in this fashion. I felt that maybe we will be splitting the points after Afghanistan equalised. But the boys did what they did. But at the same time, such milestones don’t mean much to me. I am honoured and privileged to wear the National team jersey for so long,” Sunil averred.

Chhetri laughed when reminded about him sprinting like Usain Bolt to celebrate Sahal’s strike. “The GPS will say that that was my fastest sprint of the night. We will rest, recover, and have a look at the videos. Hong Kong are a good side, but we are at home, and will be backing ourselves. All of the fans will be there too.”

Head Coach Igor Stimac stated, “We were Blue Tigers in the match against Afghanistan, and that’s what they need to be on the pitch. That’s our intent, keeping the pride intact.”

Golden boy Abdul Sahal who scored the winner late in the second-half, sounded ecstatic. “I am very much excited, and happy. The victory was earned in front of the fans, and hence, it tastes sweeter. I had to back myself, and placed it beyond the goalkeeper. And even before I could realise, the entire team was there to celebrate,” he said in reference to his match-winner.

Central defender Sandesh Jhingan also highlighted the character in the squad. “We played some great football. The character of the team was there for all to see after we conceded. The biggest strength is the talent available in the team. But the attitude, mentality and the desire to get going describes this lot,” he uttered.

Coach Stimac added, “We showed character, resilience, willingness and a good spirit on the pitch. Everyone was wonderful – Roshan, Akash, Suresh, Jeakson, and all. I felt Jeakson was having fun playing football. They have now enough experience of winning games, and that’s our treasure.”

Jeakson smiled. “It was a very important match, a kind of must-win. We are on 6 pints, and it’s not time for calculations. We will be going out to win the next match against Hong Kong.” 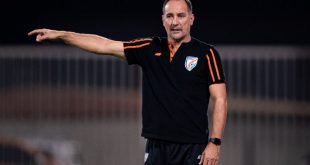