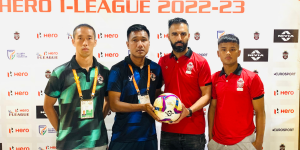 Churchill Brothers will face Aizawl FC in the fifth round of the I-League 2022-23 on Friday, December 2 at the Tilak Maidan in Vasco da Gama, Goa.

The hosts, still seeking their first win of the new season, will be eager to lift themselves off 11th place on the table. Aizawl FC will look to secure victory as well as they currently have four points from as many games. Both teams head into the fixture on the back of away losses, with the Red Machines going down 1-0 to Real Kashmir FC and the Mizo side losing 2-1 to RoundGlass Punjab FC.

Both clubs are past winners of the competition and have faced each other on 10 occasions in the league, with their head-to-head record standing at four wins each. In their last meeting, it was Churchill Brothers who came out on top with a 2-1 scoreline.

Addressing the media at the pre-match press conference, Churchill Brothers head coach Antonio Rueda stated that nothing less than a victory will suffice for his team. He said, “Tomorrow’s game is like a final for us. In pre-season, we had thought that we will be in a good position on the points table but where we stand now, the situation is uncomfortable. Against Aizawl, we need to fight hard, play with intensity, and win at all costs to get the important three points.”

Midfielder Lalawmpuia Sailo said, “This is my first season with Churchill Brothers. We have not got the start to the season that we wanted but we are determined to keep working hard and compete strongly in all our remaining matches.”

Aizawl FC assistant coach Victor Lalbiakmawia mentioned that his team has made progress over the course of the season so far. He said, “As we enter our fifth game, our performance is improving with each match and the youngsters in the team have also made a lot of improvements. Even when we have lost, it has been by a narrow margin and it is small lapses of concentration that have cost us our losses. Churchill Brothers will be determined to win as well tomorrow and it will be a very tough match. We are hoping for a positive result.”

Japanese defender Eisuke Mohri, who is playing in India for the first time, said, “It has been a nice experience adapting to life in India. Everybody here has made me feel comfortable and there is a great atmosphere in the team. Churchill Brothers are a good team and we have studied how they play. We are preparing well in our training and want to go for all three points tomorrow.”

The match between Churchill Brothers FC Goa and Aizawl FC will kick off at 4.30pm IST, and will be broadcast live on Eurosport and Doordarshan Sports, and streamed live on the Discovery Plus OTT platform.