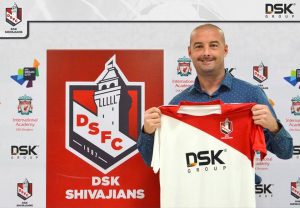 Dave Rogers joins DSK Shivajians FC from his role as Head Coach of the Liverpool International Football Academy – DSK Shivajians, a position he took up following retirement and a host of coaching stints in Ireland and the United Kingdom.

As a player, Dave had a 21-year career representing clubs in England, Ireland, Scotland, and Holland.

DSK Shivajians FC president Shirish Kulkarni, commented on the appointment by saying, “Entering into our second season of play, we wanted to show our fans and our players that we are committed to putting a quality product on the pitch, and we couldn’t think of a better way to communicate it than hiring someone like Dave Rogers. Dave’s ability, work ethic and passion combined with his international playing experience and knowledge of Indian football makes him the ideal person for this position. I am excited to work with him and I know the energy he will bring to the role will have a positive impact across the Club.”

During his two years heading up the Liverpool International Football Academy – DSK Shivajians, Rogers guided the Youth team to consecutive final rounds of the Under-19 and Under-18 I-League’s respectively, after finishing second in the Maharashtra Zone, trailing only on goal difference on both occasions.

Dave was also instrumental in creating opportunities for four players from the Academy to represent India, including 18-year-old Lallianzuala Chhangte who scored a brace in his first full senior international debut for India against Nepal at the 2015 SAFF Cup.

Dave’s quick success in identifying and grooming players in India caught the eye of Indian National Team Coach Stephen Constantine who made him a part of his backroom staff during the preparatory camp ahead of the SAFF Cup.

New DSK Shivajians head coach Dave Rogers said, “I am very excited and proud about the prospect of working with DSK Shivajians FC. I am looking forward to the day-to-day challenge of competing in the I-League and other competitions. I would also like to thank Mr. Shirish Kulkarni for placing his trust in me for this important position. Over the course of my tenure at DSK Shivajians FC I’ve been committed to developing players and enabling them to play exciting and attacking football and this will continue into my work with the senior team.”

Born in Liverpool, Rogers started his career at the Everton School of Excellence, before joining Tranmere Rovers at the age of 16 years, where he made his professional debut, following which he played for English clubs like Carlisle United, Peterborough and Scunthorpe United, Scottish side Dundee FC and SC Cambuur Leeuwarden of the Netherlands.

He went on to play at the top most level in Ireland with Shelbourne, one of the most decorated clubs in the country, where he won three League of Ireland Championships in four seasons. At Shelbourne, he memorably scored a volley against the then Croatian champion side Hajduk Split to guide his team into the UEFA Champions League Third Qualifying Round, making Shelbourne the first Irish team to reach that stage of the competition in the process.