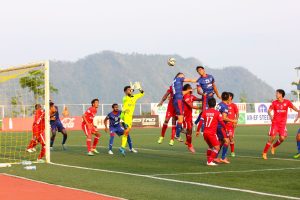 Bengaluru FC began their Federation Cup title defence with a 2-1 defeat to Aizawl FC at the Rajiv Gandhi Stadium in Aizawl on a Saturday afternoon where the Blues were felt hard done after being denied two blatant second half penalties. The result leaves the second-leg to be played in Bengaluru on May 3, evenly poised, with the Blues having taken back a vital away goal.

Earlier, Eugeneson Lyngdoh made it five goals in as many games to give Bengaluru FC a lead in the 15th minute only for Alfred Jaryan to capitalize on a defensive blip and level things in the 38th minute. But a second half where Ashley Westwood’s side should have had two definite penalties, ended with an Aizawl winner in the 90th when Joel Sunday’s strike took a deflection before rolling past a wrong-footed Amrinder Singh.

Bengaluru FC’s opener came only after Aizawl miraculously survived a slew of attacks in the first 12 minutes where defenders Emmanuel Chigozie, Lalchhawnkima and ‘keeper Soram Poirei cleared attempts from Sunil Chhetri, Kim Song Yong and Udanta Singh off the line in a space of minutes and John Johnson saw his header crash against the post. But the defence finally succumbed when Kim let Lyngdoh’s strike pass through his legs and into the goal as Poirei was left stranded.

Aizawl FC made the most of some careless defending when Curtis Osano failed to deal with Ricky Lallawmawma’s long punt, leaving Jaryan clear on goal before his left-footed strike was beyond Amrinder. He hosts could have had a second minutes later when Sunday’s curled attempt came off the post as the half ended even.

Westwood started the second half replacing Kim with Daniel Lalhlimpuia but it was Udanta Singh who came closest to scoring on the hour mark. Picking the ball in the Bengaluru FC half, Udanta blitzed through the centre but was let down by a heavy touch with only Poirei to beat.

Minutes later the Blues had their first shout for a penalty turned down after Aizawl FC defender Lalruatthara, after being beaten, blatantly tugged at Udanta’s shirt to bring him down but referee Ajit Dutta wouldn’t have any of it.

Daniel had a gift-edged moment of his own in the 77th minute when he was clear on goal but a second’s delay in taking a shot was enough for Chigozie to stick a leg in and prevent what would have been a definite goal.

Down by a goal, Bengaluru FC thought they had their moment to square things when Chigozie clattered into Daniel in the box with seconds left on the clock but shockingly, Dutta didn’t seem to flinch as the BFC bench watched in disbelief and anguish.