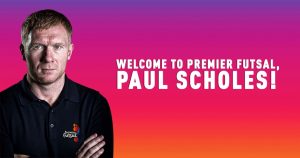 Former Manchester United star Paul Scholes has signed a deal to play for the next three seasons of Premier Futsal, the world’s first-ever multi-national futsal league announced today in an emphatic statement of intent ahead of its inaugural season.

Scholes is one of those rare English footballers who played their entire professional careers at a single club. He is one of the most decorated footballers of England and is one of the most successful footballers in English club football. Paul Scholes has won a total of 25 trophies, featuring 11 Premier League titles and two Champions League trophies during his stint with the Red Devils.

Scholes, part of Manchester United’s class of 92 – the famous golden generation which included stars like David Beckham, Ryan Giggs and the Neville brothers – is widely regarded as one of the greatest midfielders of modern football. He boasts a staggering 718 caps for Manchester United over an illustrious career spanning 22 years.

Paul Scholes said, “Futsal is a fascinating format that has played a pivotal role in developing the skills of some of the greatest football players. I have seen Futsal grow not just back home, but also across the world and I have played in a few of those tournaments. Premier Futsal will be a great way to introduce the sport to India and I’m looking forward to meeting the fans across India who I know are some of the most passionate in the world.”

Scholes becomes the second of the eight marquee players which will be a part of Premier Futsal. Scholes will light up Indian shores in the five-a-side competition, starting July 15, 2016. Former Portuguese star Deco was announced earlier this month. Players will be allotted teams through a player draft which is slated to take place later this month.

Premier Futsal Co-founder, Nithyashree Subban said, “We are extremely proud to announce Paul Scholes as marquee player for Premier Futsal. Since our launch, we have maintained that we are committed to bringing the top talent from across the world to India and we are clearly delivering on our promise. Dinesh, Abhinandan and I were inspired by the Honourable Prime Minister Shri Narendra Modi’s call for innovation in the field of entrepreneurship. Through a pioneering model for introducing Futsal and a holistic approach to breed home grown talent, Premier Futsal aims to be the marquee all star futsal tournament in the world.”

Premier Futsal is a private and semi-professional Futsal league promoted by Xavier Britto of Indev Group. The league will be hosted from July 15 to 26, 2016 to create awareness about Futsal as a sport in India. Premier Futsal will make India the first country in the world to host a multi-national All-Star Futsal tournament that brings the legends of football and futsal together. Led by the ‘Pele of Futsal’ Alessandro Rosa Vieira fondly known as Falcão, the league will feature over 50 International Futsallers from four continents and 21 countries. Each franchise will be assigned a marquee international football player, seven international and five Indian Futsallers through a player draft scheduled later this month.

The league will kick-off July 15, 2016, and will be telecast live and exclusive on Sony SIX, SONY ESPN and Sony AATH. Matches will also be available to live stream on Sony LIV.