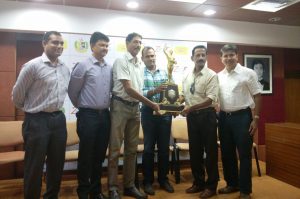 The finals of one of Goa’s most prestigious and historic football tournaments, the Bandodkar Gold Trophy Football Tournament is set to be held tomorrow evening. The last few days saw eight teams battle it out for the prestigious trophy.

The semifinals of the tournament were played today with Sporting Clube de Goa losing to Pune FC in extra-time at the Duler Stadium in Mapusa and while Dempo SC beat Churchill Brothers SC at Navelim football ground.

To celebrate the historic tournament a Motorcade has been organized wherein the Bandodkar Gold Trophy will be escorted by armed guards and accompanied by former winning captains from the GFA office in Panaji to the Duler stadium. The motorcade will be led from the front by the Harley Davidson’s HOG Goa. The Motorcade will begin at 5pm from Panjim.

Well known anchor, actor and singer Vandana Vadehra will perform at the finals of the Bandodkar Gold Trophy Football Tournament at the Duler stadium tomorrow.

In an effort to keep the legacy and spirit of the traditional tournament alive, the Goa Football Association (GFA) had stepped in to organize the Bandodkar Gold Trophy Football Tournament 2016, ably supported by the illustrious Bandodkar family.

Elvis Gomes, Goa Football Association president, said, “I am happy that we at GFA have been able to revive the glory of the Bandodkar Gold Trophy Football Tournament. The final of the tournament are being held tomorrow at Duler Stadium. The last few days have seen exciting matches being played. The intention of the tournament was to see the Bandodkar Gold Trophy Football Tournament being revived. That was the objective and we have achieved it.”

“Tomorrow is also the inauguration of the floodlights at the Duler Stadium. We are delighted that this facility is being set up in North Goa. We will now be able to see a lot more matches being held at Duler stadium in the evening under the floodlights. I thank Sameer Kakodkar and the entire Bandodkar family, former football players Brahmanand Sankhwalkar, Oscar Rebello and Savio Medeira for being here today and Rahul Rodrigues for planning this excellent event.”

Sameer Kakodkar from the Bandodkar family said, “I thank Goa Football Association who has brought this dream alive after 22 years. The daughters of Mr.Dayanand Bandodkar, Goa’s first Chief Minister, are thrilled that this tournament is being revived and wish the team all the very best.”

Reliving his memories of the Bandodkar Gold Trophy Football Tournament, former goalkeeper Brahmanand Sankhwalkar said, “I was below 20 years old when I captained the team and won in 1974. This tournament was a perfect platform which helped me do better in the years that followed. I recall the sportsmanship of Mr. Dayanand Bandodkar when I used to see him come on to the field and kick the football.”

Rahul Rodrigues, Co-founder and MD Zest Concepts, said, “As marketing partners to the GFA for the prestigious Bandodkar Gold Trophy Football Tournament, we at Zest Concepts are delighted and extremely appreciative of the response received by the football fans towards the revival of this tournament which is rich in history and tradition. We are hopeful that the finals will be a real spectacle and that the fans will show up in large numbers to show their support.”

The final of the tournament will be played tomorrow, May 31 at 7pm at the newly upgraded Duler Stadium in Mapusa, which has been upgraded with state-of-the-art technology and floodlights coming in from Europe. The stadium will now be able to host floodlight matches.