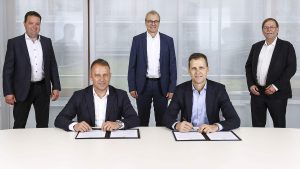 Hansi Flick will take over as the new head coach of the Germany national side. The 56-year-old signed a contract running until 2024 today, May 25 at the DFB headquarters in Frankfurt am Main, which also includes EURO 2024 to be held in Germany. First vice-presidents Peter Peters and Dr. Rainer Koch, as well as treasurer Dr. Stephan Osnabrügge signed on behalf of the DFB.

Hansi Flick’s contract will begin on July 1, 2021 and he will take over from Joachim Löw once this summer’s EURO 2020 have finished. Löw had already agreed to end his contract – which ran until 2022 – after the tournament. Flick was Löw’s assistant from 2006 to 2014 and they won the 2014 FIFA World Cup in Brazil together. After that success, Flick became DFB sporting director, before leaving that post voluntarily in 2017. He then took a job as sporting director at TSG Hoffenheim prior to taking over as head coach at FC Bayern, where he won seven trophies in two years, including the Champions League, the FIFA Club World Cup, the DFB-Pokal and two Bundesliga titles.

Hansi Flick commented, “Everything happened very quickly, especially signing the contract, but I’m really happy to be the Germany head coach from autumn. The season has just finished and the last two years at FC Bayern have left their mark on me. The team spirit and attitude of the players were excellent and I will take plenty with me that will help my work in my new role. I’m really excited because of the class of players we have in Germany, especially the youngsters. We’ve got every reason to be optimistic about future tournaments, including the home EUROs in 2024. From experience, I know that Oliver Bierhoff will be a strong, trustworthy partner and that the staff behind the scenes will help to ensure that we won’t need too long to get going. I’m also looking forward to implementing some of my ideas for the national team and the academy. At the moment, though, what happens in September is not important – I will have a detailed report in August ready. What matters right now is the upcoming tournament and I would like to wish Jogi Löw, Marcus Sorg, Andy Köpke and the team the best of luck. Jogi Löw more than deserves a great finish to his wonderful career as national coach.”

Oliver Bierhoff, DFB director of national teams and the academy, was in charge of leading the discussions with Flick, and said, “I’m very proud that we have managed to sign Hansi Flick as head coach of the national team. He was top of my wish list right from the start. I know and value Hansi Flick, both as a person and as a coach, due to our many successful years together with the national team. During his time at Bayern München, he proved that he’s capable of leading a team as a head coach. We quickly agreed on working together and the upcoming tasks. It was important for me that we have that clarity ahead of the EUROs. We have one major common goal, which is to return to the top of the world rankings. As the association’s sporting figurehead, Hansi will not only be involved in the sporting management of the senior national side, but also in many other projects and initiatives of our directorates, which include all national teams, coaching education and the DFB Academy.”

DFB first vice president Peter Peters said, “It’s wonderful that Hansi Flick is returning to the DFB as head coach. Since his highly successful time here, he has continued to develop extraordinarily as both a person and a coach, as shown by his fantastic success with FC Bayern.”

Dr. Rainer Koch, DFB first vice president for amateur football, said, “We thank FC Bayern and their management, who have been very cooperative in and supportive in paving the path for Hansi Flick to take up the position of national team head coach.”

Treasurer Dr. Stephan Osnabrügge said, “Oliver Bierhoff conducted the discussions discretely and purposefully on behalf of the executive committee, who were kept informed about the current status at all times. It’s good that we have clarity early on and can now concentrate fully on the upcoming tournament.”

Hansi Flick and the Germany national team’s first task together will be the 2022 FIFA World Cup qualifier in Liechtenstein on September 2. His first home game follows against Armenia on September 5, before a trip to Iceland on September 8.

Ansgar Knauff called-up to Germany U-21 squad as a replacement!

With Youssoufa Moukoko and Roberto Massimo forced to withdraw, Borussia Dortmund’s Ansgar Knauff has been …