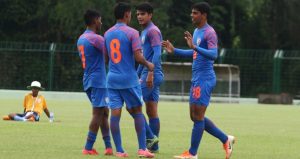 India U-15 boys churned out yet another fine performance at the Kalyani Stadium as they beat Sri Lanka 5-0 on Tuesday, August 27.

Himanshu Jangra was the star of the show, as he scored a hattrick, while Maheson and Shubho Paul also netted one each.

India gaffer Bibiano Fernandes made two changes to his lineup, with Himanshu Jangra replacing Sridarth upfront, and Satvik Sharma took Sibajit Singh’s place in the middle of the park.

India started dominating from the early exchanges, but the Sri Lanka defence held their own. India attacking midfielder Maheson Singh was on form, giving ample opportunities to striker Jangra.

However, the striker finally broke the deadlock when Maheson again found him with a defence-splitting ball, as Jangra slotted it into the net.

Soon after, Maheson pulled the trigger from outside the box and doubled the lead, before Jangra scored his second as he slipped one past the Lanka keeper.

Shubho Paul made it four deep into injury time of the first half, as he cut in from the left and curled it into the net.

Jangra completed his hattrick in the second half when he skipped past a defender and slotted it home.

“I’m happy that the players are scoring so many goals. I’m very happy for Himanshu. He finally got his chance and showed what a lethal goalscorer he can be,” said India Head Coach Fernandes.

“It’s a problem of plenty, but it’s a good problem to have, as I know that If Sridarth is not there, Himanshu can set up to the plate,” he rounded off.

India are set to play their final group stage game against Bangladesh, which kicks off at 3 pm on Thursday, August 29, at the Kalyani Stadium.

Nepal completed a surprise 4-1 victory over defending champions Bangladesh, making it an interesting finish for the top two spots in the 2019 SAFF U-15 Championship, at the Kalyani Stadium, on Tuesday, August 27.

Nepal captain Pradip Lamsal and first half substitute Krishna Adhikari Yadav scored a brace each as the Himalayan nation ran away with the three points.

With this result, Nepal have leapt ahead of Bangladesh to the second spot on the SAFF U-15 Championship table by virtue of a better head-to-head record.