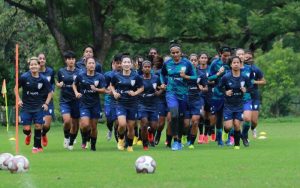 The Indian Senior Women’s National Team for the SAFF Women’s Championship 2022 will be having a preparatory camp in Pune starting tomorrow, August 29 till September 2, 2022. The Championship is scheduled to take place in Nepal from 6-19 September, and the Blue Tigresses will depart for Nepal on September 3.

The India Women, the defending champions, have been drawn in Group A along with Maldives, Pakistan and Bangladesh, and will open their campaign against Pakistan on September 7, 2022. The top two teams from the group will advance to the semifinals.