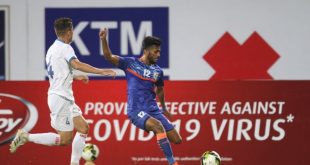 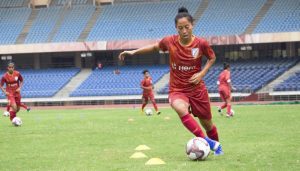 As Indian Women’s Team’s mercurial striker Bala Devi flew off to Glasgow, Scotland for a week-long trial at Rangers WFC, the bigwigs from the Indian Women’s Footballing community got together to wish her ahead of this crucial week.

Bala Devi, who has been in the national team fold for some time now, has been handed a one-week trial at Scottish giants Rangers WFC, whose best finish in the Scottish Women’s Premier League was a fourth-place finish in 2018.

India Women’s Team head coach Maymol Rocky lauded the move and said it is the result of all the hard work that the 29-year-old has put in over the years.

“It is a great opportunity for Bala – to go and play professionally at Rangers. It is the result of the hard work that she had put in over the years. It’s really great for Indian Football that one of our players is getting the opportunity to prove herself at such a level,” said Rocky.

India Women’s Football legend Bembem Devi, who is often referred to as the Durga of Indian Football, believes that this is an instance from where young aspiring girls can draw inspiration and move ahead.

“It really is a great achievement for her. Women’s Football in India is growing and the fact that Bala has got this opportunity is a huge deal, not just for her, but also for female footballers all across the country,” said Bembem.

“Little girls can take inspiration from her and take Indian Women’s Football further ahead in the future,” she added.

India captain and centre-back Ashalata Devi believes that such opportunities could really help the Indian Women’s Team and the players, especially due to the experience Bala will gain in Scotland.

“Bala has been one of the best players in our team over the years, and she has continued to perform excellently on a regular basis. It makes me very happy to see her get this opportunity. I’m sure she will learn a great deal more there and, in turn, help the National Team perform better in the future,” said Ashalata.