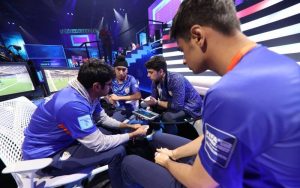 The Indian eFootball National Team’s campaign in the FIFAe Nations Cup came to an end on Day 2 of the Competition.

India had amassed five points from as many games on the first day. But they begun with a 1-5 defeat at the hands of Group D top seeds Italy, which was followed by another 1-3 loss against the Netherlands.

While it was the same combination as Charanjot Singh and Saransh Jain that started the first two matches, the eTigers made a switch in the third game against Poland, where Siddh Chandarana took to the controller alongside Charanjot.

It was a much closer affair against Poland, who managed a solitary second half goal to clinch the game.

India needed to win the last two matches to have a chance of making the top four in the group, which would mean qualification for the Round of 16, but another late winner by Mexico in the fourth game of the day dashed all hopes.

Morocco put the final nail in the last match of the day, handing a 0-3 defeat to the eTigers.

The 131st edition of the Durand Cup will be broadcast on Sports18, which is owned …