Press Release 2021-10-19 Asia, Team India Comments Off on India’s Igor Stimac: Togetherness, the energy, & the attitude made the difference! 370 Views 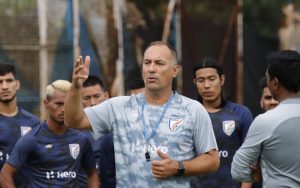 Indian National Team head coach Igor Stimac mentioned that togetherness, energy, positive attitude and a great mindset have been the biggest takeaways as Indian Football moved forward together towards the final qualification process of the 2023 AFC Asian Cup – China. In a chat, Stimac talked at length about Indian football, Sunil’s striking partner upfront, the turnaround in the SAFF, the journey so far, Sandesh Jhingan’s move to the Croatian League, and much more.

How are Manvir and Sunil gelling on the pitch?

They are settling down as partners on the pitch. We are using each and every minute on the pitch to help Manvir develop himself and his game so that he can help the National Team in the future. Manvir plays in different positions in his club, and in the National Team. In the club he plays more as a winger with Roy Krishna in the middle. But he has been playing regularly and that’s been a great benefit for him. In the last couple of years, we spotted his capabilities and his energy, and his rise as a player. It will take some more time for him to develop as a proper striker. But as for now we see him as a great partner with Sunil upfront.

Apart from Manvir, have you spotted any other player in that position.

Sunil needs someone who can take the pressure off him. He is still at his peak and was the only player to have played almost every minute in the SAFF Championship. Other than Manvir, we do have others too. Rahim Ali showed in the recent games that we can count on him in the future. He’s a great boy with great energy and speed. He’s got strength and he can handle the pressure very well. He’s also got power in his legs. But we need to use these boys in the League also in their natural positions, otherwise their game will not progress.

We had two consecutive drawn matches in the SAFF Championship. After that, there was no looking back. How did the turnaround happen?

It was difficult for us – the situation we found ourselves in after the first two games. I can tell you that there was no big difference in approach, as much there was no big difference in the numbers in statistics after. You need to score to win football matches and hence, there was a lot of pressure. But we handled it well, stayed focused on the job. At the end, we won it – which was important. Even I don’t consider that as a certain special success because it’s normal that India wins when it goes to the SAFF, but we demonstrated that we were very dominant in this competition, and that we can progress in our game a lot more.

It’s not just the goals he scores, but it’s his leadership on the pitch that is special. He is a role model, and he is the most passionate one in the dressing room. At this age, that’s quite unbelievable. His fitness is unbelievable and we wait for someone to step forward together with a better fitness condition, and with a better scoring ability to replace him.

The SAFF Championship is your first International trophy for India. What are your feelings?

The feelings are special, and it’s all for the players. I’m happy for them. They worked really hard in very difficult circumstances as there was a lot of criticism. Some two and a half years back when we started the process, we started with a certain knowledge about what we need to do, how long it will take, and how patient we need to be in the course of time. No National Team coach has the budget to buy players, and every National Team coach works with players that come out of the Leagues. To reiterate myself – on the very first day I had mentioned that suffering will be part of the way, but that’s the only way to go where we are heading to.

You have started with different line-ups in different matches. Why has that been?

If anyone can show me the same XI being put in every day, maybe I will be able to answer that. It doesn’t exist in football anymore. We are not a club. We are a National Team. There are injuries and then there are suspensions. You also need to prevent injuries when you are playing 5 matches in 13 days. In such situations, can you put 11 players on the pitch? That’s impossible.

What were the takeaways from the SAFF Championship?

The togetherness, the energy, the positive attitude and a great mind set. I know we were favourites going in this tournament, and we had certain problems at the beginning. We also did not get time to prepare much in comparison to other teams. If you look at Nepal, they were in preparation for this tournament for nearly two and a half months. We had only seven or eight days before prior to the tournament. The manner in how the lads stood out, stayed positive, fought together, and how much energy they brought on to the pitch was amazing.

How do you look back at the journey with the Blue Tigers?

Two and a half years ago I agreed upon taking this job because I understood that the AIFF Technical Committee, comprising of former players and captains, will understand the process, and what it takes, and how long it might take. I’m grateful to them for their support. We started reconstructing the team from the very first day because we opted for more technical football. We opted for more ball possession football, and opted for more technical players.

Looking back at the results, I’d say that the match where we didn’t fulfil the expectations was against Bangladesh in Kolkata. All the rest was done in very difficult circumstances. If we look back, we will see that we played only two home games instead of five in the recent Qualifiers. Our first aim was to make sure we qualify for the third round. We secured third place in the group, and from there on to qualify for the final stages of 2023 AFC Asian Cup – China.

When we speak about areas on the pitch, the most important thing for me is that we developed a player’s knowledge about the importance of nutrition, about individual training, what they need to execute during the off-season, and importance of rest. All of that has been a massive help. Our players have become conscious about how short their career is, and that they need to use every minute of their free and spare time to develop their knowledge to develop their fitness.

At the moment, we have some very important players in the team who are the spinal players, and we have other players. But for each position, there are three players with similar qualities. So we are not afraid anymore of losing anyone. So from this stage now, we aim to go one step further – which will be playing good football in the third round of the qualifiers, and making sure that India qualifies for the 2023 AFC Asian Cup – China.

How do you rate Liston Colaco as a player?

I consider him one of our players who may become very important for the future. He’s got speed and the technique, and he can score goals. Of course, he needs to develop his defensive qualities, fall back, and become more responsible. For now, he’s in the group of players which can give us a certain quality when we play against better sides when we can use the space behind their back with his technique, speed and understanding of the game. I’m happy that we have a diversity of players. I would say that we have become a very solid side defensively, and we are no longer the India which will concede many goals.

What do you make of Sandesh Jhingan’s move to Croatia League?

His move is a reflection of his character, and how ambitious he is. Now everyone can make such a decision — coming up out of their comfort zone and challenging himself, all in an effort to prove himself at a very high level. I need to tell you that the Croatian League is a highly competitive league and Croatian football is the biggest factory of professional football players in the world. He will find himself in a very difficult position, in a very competitive league, and in a very competitive club. It’s not going to be easy for him. But it’s great for the National Team that someday he succeeds there at this level. It will then open the doors for some other boys to go Europe to the higher better leagues to learn more, and to have more games to gain more knowledge about football.