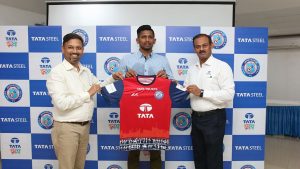 An, ex-Tata Football Academy cadet, he has donned the national team colours on 23 occasions and has represented reputed clubs such as East Bengal and Mohun Bagan in the I-League. He represented Mumbai City FC in 12 matches in the recently concluded Indian Super League (ISL).

Raju Eknath Gaikwad is primarily right-footed but can easily slot into any full back position and is a long throw specialist.

On signing with Jamshedpur FC, Raju added, “I am extremely happy to come back to Jamshedpur and revisit TFA. I have some great memories of the city and the stadium. Also, when I came as an away team player last season I was extremely happy to see the changes and development of infrastructure in and around the stadium. I followed Jamshedpur FC’s progress last season and it was heartening to see their determination throughout the league being a new team. I have come here to help the team win some silverwares.”

Jamshedpur FC CEO Mukul Choudhari added, “We are delighted to have him back in Jamshedpur. Being a TFA cadet he understands and represents the value of TATA. He will add great value to the team and I wish him success. We welcome him to Jamshedpur FC.”