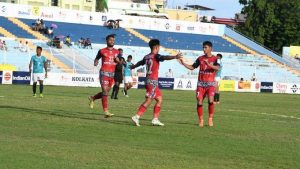 Jamshedpur FC today defeated Indian Air Force FC 2-1 to end their Durand Cup 2022 Campaign on a positive note. A late strike from Mawia ensured that the Men of Steel bag full points in their second consecutive victory in the tournament.

The young Men of Steel acquired the lead at the 25th-minute mark. Lalruatmawia laid a piercing through-ball at the end of a quick counter-attack from the midfield to the opposition box. Piush slotted it in with ease to give Jamshedpur the lead.

Just minutes later Indian Air Force bounced back in the game with a long-range attempt from outside the box. The ball was laid off to Indian Air Force’s Soma who pulled the trigger and found the back of the net. With a goal on the scoreboard each, the two sides put an end to a hard-fought first half.

Coming back from the break both halves of the pitch saw multiple chances being created. But none of them came close enough to give the teams the lead.

The young Men of Steel looked dominant with their approach, both in the defence as well as the offence. A few close calls came through for the Indian Air Force squad but Jamshedpur FC goalkeeper, Mohit Dhami stood firm on the goal line. The young man between the sticks parried away every chance.

Finally Jamshedpur FC’s constant attacks paid off for them. As they found the back of the net at the 84th minute earning them the long awaited lead. Tapan Halder delivered a curling ball into the heart of the box. Mawia, who was already on his run towards the goal, volleyed the ball into the top net making it 2-1.

With six points from four games Jamshedpur FC ended the Durand Cup 2022 campaign third in Group-A of the tournament.

WHAT AN END TO OUR CAMPAIGN! 😍