Jamshedpur FC face Kerala Blasters in their first clash of 2023! 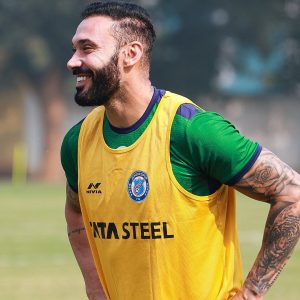 In the Men of Steel’s previous fixture against FC Goa, both teams shared the spoils at the end of the night at Furnace and closed their 2022 on a positive note. A tight encounter between the two energetic sides saw Jamshedpur FC leading the game 2-1 till the very end. Unfortunately, the clash ended with the Gaurs scoring a late equaliser in the final moments to settle the scoreline at 2-2.

Now the Men of Steel will kick off their new year as they head down to Kochi to face the Tuskers for their first away game of 2023.

On the upcoming outing, the Jamshedpur FC Head Coach Aidy Boothroyd stated, “We are transitioning into a stronger team and we hope we can give them a few problems tomorrow.”

Previously, the two sides have gone face-to-face for a total of 13 times out of which both sides have won and lost three each. Seven have ended with the teams sharing the points.

The two sides faced each other exactly a month ago at the Furnace which resulted in the Kerala Blasters acquiring a slim victory (1-0) over the Men of Steel. A tight 90 minutes shared by the two at the Furnace saw Jamshedpur FC creating numerous opportunities of scoring but were unfortunate to lose the game in their previous meeting.

In the last season, these two sides managed to finish within the Top 4 positions at the end of the league stage. Later they met each other in the semifinals of the playoffs stages of the league wherein the Tuskers made their way to the final by knocking out Jamshedpur FC in the second leg.

Now with the first half of the 2022-23 season put to a close, Jamshedpur FC are in 10th position with only five points while Kerala Blasters are in the fourth place with 22 points at the moment.

With the upcoming meeting being their first game of 2023, the two squads will want to kick start their new year the perfect way, walking out with a victory. While the Kerala Blasters enjoy their winning run, the Jamshedpur squad, on the other hand, will aim to produce their best performance in the upcoming game along with the further games to acquire as many points as possible.