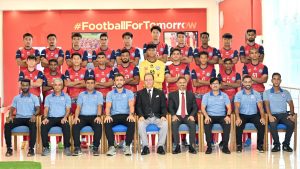 Jamshedpur FC is heading to Kolkata for the 131st edition of the Durand Cup. The tournament will be played between August 16 and September 18, 2022. It will be organised by the Indian Army on behalf of the Armed Forces.

The Durand Cup will be a 20-team competition divided into four groups. Jamshedpur FC will participate among 11 Indian Super League (ISL) clubs, 5 I-League teams, and 4 Indian Army Air Forces teams. Jamshedpur will compete in group A with FC Goa, Mohammedan Sporting Club, Bengaluru FC and Indian Air Force. The venue for Group A is Kolkata & the matches will be distributed between the Vivekananda Yuba Bharati Krirangan, Naihati Stadium, and Kishore Bharati Stadium.

The team will play under the guidance of Carlos Santamarina, the coach for this tournament, said, “It’s going to be a good experience for the team. The young players crave to play in competitive tournaments, and the Durand Cup could not have come at a better time for us. The tournament will provide a fantastic platform for the players to know where they stand and gain competitive minutes as they play to try and win.”

The tournament has a very significant history, as it is Asia’s oldest football tournament. It is one of the most anticipated and renowned competitions in the world.

Jamshedpur FC CEO Mukul Choudhari added, “Durand Cup is one of the oldest club competitions, and we are thrilled that it will kick off soon. Jamshedpur FC is honoured to participate in this competition. This will allow us to showcase our young talent and measure their development amongst the country’s top teams. We would like to wish the team the very best for the competition.”

The matches will be live on Television on Sports 18 Network and online platforms such as Voot Select & Jio TV. Jamshedpur FC’s first match will be against Bengaluru FC on August 17 at Kishore Bharati Krirangan, Kolkata. Stay tuned to our website and social media channels for updates on Jamshedpur FC from the Durand Cup.