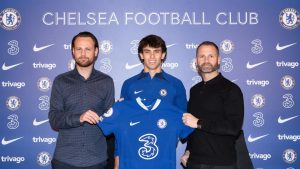 Portuguese attacker Joao Felix will be part of the Chelsea FC squad for the remainder of the 2022/23 season, having moved to Stamford Bridge on loan from Atletico Madrid.

The 23-year-old previously played for Benfica in his homeland before switching to the Spanish capital in the summer of 2019, for a record fee for both clubs.

A skilful and stylish attacker, Joao Felix is most effective when roaming fluidly across the forward line and involving himself in the build-up play.

On moving on loan to Chelsea FC, Joao Felix said, “Chelsea is one of the great teams in the world and I hope to help the team reach their objectives, so I am very, very happy to be here and very excited to play at Stamford Bridge.”

Joao Felix was part of the Atletico side which claimed La Liga two seasons ago and as a teenager at Benfica, he was also a league champion, in his debut season.

As well as team glory, the Portuguese international has been recognised individually, with his 2019 Golden Boy award honouring him as the best young player in Europe. He was also named Atleti Player of the Season last term by the club’s supporters.

At the 2022 FIFA World Cup in Qatar, Joao Felix scored a vital goal in Portugal’s opening game, a 3-2 win over Ghana and he provided two assists during the tournament. He already has 28 caps to his name.