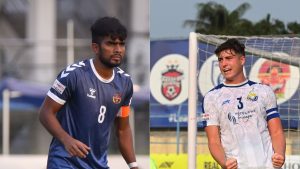 The 2021-22 I-League Relegation Stage has gone down to the wire after what has been an impeccable second phase of the season from Kenkre FC. The newly-promoted side seemed doomed to finish bottom after earning just two points in the first phase.

But Akhil Kothari’s Kenkre FC have turned their season around in dramatic fashion, with three wins and a draw in their last four games to cut the gap to one single point heading into the final matchday. Aravindraj Rajan’s late goal handed them a 1-0 win over Real Kashmir on Sunday, which was their fourth consecutive clean sheet.

Importantly, Real Kashmir still have a point advantage over Kenkre FC, so their fate is in their own hands. A win over TRAU will guarantee that the Snow Leopards avoid finishing at the bottom irrespective of Kenkre FC’s result. Worryingly for coach David Robertson, Real Kashmir are on the worst-ever winless run in their league history, stretching back to 10 games.

Injuries have been a big cause of concern for Real Kashmir, preventing them from fielding a full strength squad for most of the season. The good news is that captain and top-scorer Mason Robertson is expected to be back for the last game, giving the Snow Leopards’ fans much-needed hope.

If Kenkre FC beat Indian Arrows, they would finish second from bottom provided Real Kashmir fail to win against TRAU. Crucially, Kenkre FC hold the head-to-head advantage over Real Kashmir, meaning a draw will be enough for the Mumbai-based club if the Snow Leopards lose.

Should Kenkre FC pull off this unprecedented comeback, it’d be nothing short of a miracle. Heading into Phase 2 eight points behind safety, barely anyone would have given them a chance. Yet, here they are, with 10 points out of a possible 12 in the Relegation Stage, teaching us an invaluable lesson of ‘it’s never over till it’s over’. Akhil Kothari and his men have given us much more than a fight. A blockbuster final matchday.