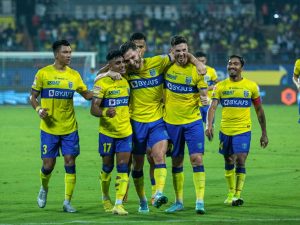 When Jamshedpur FC opted to go for a 3-4-1-2 formation. Coach Ivan Vukomanović opted to field the Kerala Blasters unit under 4-4-2 formation with Adrián Luna moving to the central midfield replacing Ivan Kalyuzhnyi (who missed the match due to a suspension) and Apostolos Giannou joining Dimitrios Diamantakos in the frontline.

Both teams conveyed their message to the opponents within the opening minutes itself. With Sahal Abdul Samad rushing into Jamshedpur FC penalty box in the 2nd minute and Chima Chukwu sprinting into Kerala Blasters penalty box to connect a long ball within seconds, both teams were eager to score first and induce pressure on opponents. Sahal Abdul Samad was back to knock on the goal line in the 4th minute only to be blocked by Pratik Chaudhari. 5th minute showed how dangerous Kerala Blasters attacking unit of can be. Adrián Luna was there to connect a pass from Dimitrios Diamantakos inside the Jamshedpur FC penalty box but the shot on target was blocked for the visitors by Muhammad Uvais. Ishan Pandita knocked on the Kerala Blasters goal line in the 8th minute only to find that Kerala Blasters custodian Prabhsukhan Singh Gill was vigilant enough to collect the ball with ease. On the other end, Apostolos Giannou made a header attempt and was denied by the Jamshedpur FC defence. ‘The red mariners’ were quick to launch a counterattack and Prabhsukhan Singh Gill was there to deny a shot on target from Chima Chukwu.

Kerala Blasters were back knocking on the goal line in the 13th minute with Dimitrios Diamantakos flicking the ball to Apostolos Giannou who tried a header attempt and unlucky to miss the target. Another run from Dimitrios Diamantakos in the 16th minute was denied by offside flag. A quick attack from Ishan Pandita got the Kerala Blasters defence and Prabhsukhan Singh Gill off guard on the 17th minute and Chima Chukwu did the job for ‘The Men of Steel’. Equalizer from the visitors.

A shot on target from Rahul KP in the 22nd minute was collected by Jamshedpur FC custodian Vishal Yadav. But that did not stop him from trying another shot in the 27th minute to miss the target narrowly. Kerala Blasters were back testing the Jamshedpur defence in the same minute through Apostolos Giannou delivering a cross which was collected by Vishal Yadav to avoid danger.

Handball from Boris Singh inside the penalty in the 30th minute made the referee point the fingers at the penalty spot in favour of Kerala Blasters. With Vishal Yadav diving in the wrong direction, Dimitrios Diamantakos made no mistake to hand the Kerala Blasters a 2-1 lead.

Kerala Blasters went for the substitution first by bringing in Nishu Kumar for Jessel Carneiro at the starting of second half. Soon after the match restarted, Ishan Pandita was there to knock on Kerala Blasters goal line on the 46th minute only to miss the target. Sahal Abdul Samad was successful to break the defence line and receive a through ball from Adrián Luna and make a run to deliver a pass into the penalty box on the 47th minute. But Jamshedpur FC defence was quick to regroup and clear the danger. A defence breaking run from Chima Chukwu on the 53rd minute was brought down by an interception from Prabhsukhan Singh Gill outside the penalty box. Sandeep Singh got Kerala Blasters close to scoring on the 60th minute only to be denied by Vishal Yadav. Sandeep Singh was back knocking on the goal line with a header within seconds followed by a brilliant clearance on the other end of the pitch to deny Ishan Pandita getting anywhere near the goal-line.

A string of perfectly calculated and executed one-touch passes combined with a brilliant finish from Adrián Luna in the 65th minute will remain as one of the best team goals from the ‘Men in Yellow’. It all started from Adrián Luna and Jeakson Singh closing down on Rafael Crivellaro and Adrián Luna clearing the ball. Luna passed the ball to Hormipam Ruivah and ball was passed back to Luna followed by a 1-2 pass between Luna and Hormipam, Luna move three steps forward with the ball and passes the ball to Sahal to start a symphony of one touch passes. Sahal gives the ball back to Luna, Luna to Diamantakos, Diamantakos to Giannou through a back heal, Giannou gives the ball back to Luna with another back heal and the ball was guided to the target by the ‘Magician’ himself.

With the two goals lead and time slipping away from the clock Jamshedpur FC tried for final fightback. With bringing in Víctor Mongil and Nihal Sudheesh in the 72nd minute replacing Apostolos Giannou and Sahal Abdul Samad the Kerala Blasters ensured that the energy level on field remained high. Bryce Miranda replacing Rahul KP on the 79th minute and Bidyashagar Singh replacing Dimitrios Diamantakos in the 90th minute ensured that the visitors defence unit was kept occupied till the final whistle. With the final whistle, Kerala Blasters walked out of the pitch unbeaten from the 8th consecutive match and the three points.