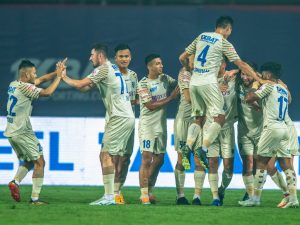 Kerala Blasters picked up a narrow 1-0 victory against Jamshedpur FC at the Furnace thanks to a first half strike from Dimitrios Diamantakos.

Jamshedpur FC made a number of changes in their starting lineup for this clash, with the most notable one being a debut for Phijam Vikash Singh.

The return of Eli Sabia in central defence from injury provided a much needed boost to the squad, while Farukh Choudhary was handed the task of anchoring midfield in the absence of the injured Wellington Priori.

Jamshedpur FC started the game fairly solid at the back, but the first blow was once again landed by the opposition in the 17th minute. A swinging free-kick from Kerala Blasters was turned home at the back post by the in-form Dimitrios Diamantakos to silence the home crowd.

Despite a valiant fight back and a good opportunity for Ritwik Das, the Men of Steel went into the half-time break a goal down.

The second half brought with it renewed hope for the home side, for whom Ishan Pandita came on to try and make a difference in the game.

The Indian striker had a clear impact on the contest, with a good opportunity to equalise in the 60th minute. Ishan was through on goal but only managed to sky his effort instead of getting it on target.

Peter Hartley headed a Jay-Emmanuel Thomas corner over the crossbar in the 69th minute, but perhaps the best chance of the game came just a few minutes later.

Pandita was played in on goal before being fouled right at the edge of the box. The referee gave only a free-kick but replays showed it could very well have been given as a penalty as well. JET only managed to fire the resulting free-kick over the bar, however, and the Blasters maintained their slender advantage.

A stinging effort from Pandita in the 84th minute was inches from landing under the bar, but the away side hung on to inflict yet another defeat on Jamshedpur FC.

Jamshedpur will travel to Kolkata next to play ATK Mohun Bagan on Thursday, December 8.