Macron brand No. 1 in football in Italy! 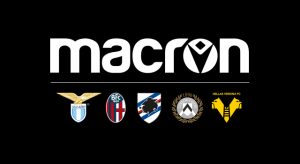 The Italian company has once again been confirmed, for the fifth season running, as the company with the most sponsored teams playing in the Italian football league.

Macron, leading company in the international sportswear market, is the brand with the largest number of clubs in the Italian Serie A. The championship that is about to begin will see five clubs wearing Macron Hero branded kits: FC Bologna, Lazio Roma, Udinese Calcio, Hellas Verona and Sampdoria Genoa.

This is a position that the Italian company has been in since the 2016/17 Serie A championship.

The sponsorship of Bologna is certainly the longest partnership, which has lasted since 2001. The latest team to become part of the Macron family is Sampdoria who will wear Macron kits for the first time in 2020/21.

High product quality, close collaboration with clubs and research and development of exclusive products are among the factors that have allowed Macron to grow each year both nationally and internationally.

The latest position as leading brand in Italy only goes to reinforce the reputation that Macron has gained across Europe, confirmed by the last “Club licensing benchmarking report: financial year 2019”, published by UEFA at the beginning of 2020. According to the report Macron is the third present brand, immediately behind the giants Nike and Adidas, with a European market share of 10%.

“As an Italian brand, we are particularly proud to be at the very top of the Italian football league,” declared Gianluca Pavanello, CEO of Macron. “The relationship we have established with our clubs allows us to create products together with them and able to respond to technical needs, without neglecting that fundamental part which links the identity of the club to its jersey. This result encourages us to continue our research and development, with particular attention being paid to the aspect of sustainability. We are now producing shirts that are in fabric made form 100% recycled polyester. We strongly believe in this path – which is part of our green project “Macron 4 the Planet”. The results we can achieve, like being in first place in Italy and beyond, they are the best reward all our work can receive.”