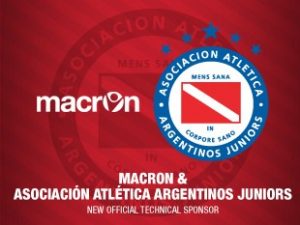 Macron and Asociación Atlética Argentinos Juniors of Argentina have signed a new technical sponsorship agreement for the next three years starting from July 2016. The club represents the cradle of one of the most famous Argentinian football players worldwide.

The school of fútbol of Bicho also consecrated at a local level with the victory of the Torneo Metropolitano 1984, Torneo Nacional 1985 and Clausura 2010; at an international level Copa Libertadores 1985 and Copa Interamericana 1986.

With this agreement Macron further strengthens the bond with Fútbol Argentino and its teams that made it famous around the world.