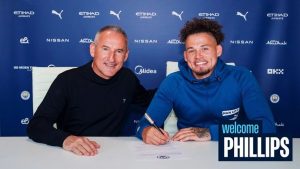 Manchester City have announced the signing of Kalvin Phillips on a six-year deal.

The 26-year-old midfielder joins from Leeds United, having made 234 appearances over the course of eight seasons, scoring 14 goals and assisting 14.

In addition to widespread admiration for his domestic performances with the Elland Road club, Kalvin has also received plaudits for his impressive individual and collective contribution to the England squad.

He was one of the key components of the Three Lions side that reached the final of Euro 2020 last summer and also played an important role in helping guide the national side to this year’s World Cup finals in Qatar.

“I am absolutely delighted to have joined Manchester City,” Phillips said.

“City have again proved to the best team in the country with an amazing squad and a manager in Pep Guardiola who is rightly considered to be the finest in the world.

“To be able to play under Pep and learn from him and his coaching staff as well as be part of a such a fantastic squad is a prospect that I am incredibly excited about.

“City are a world-class Club with world-class staff and facilities and it’s a dream come true to have joined the Club.

“Now I can’t wait to get started and to look to try and help the team to go on and achieve more success.”

Director of Football Txiki Begiristain added: “Kalvin is a player that we have long admired, and at both domestic and international level, he has proved his fantastic ability and quality over the past few seasons.

“His reading of the game, alongside his passing ability, energy and drive make him a formidable talent and he is a player who has a fantastic will to win.

“We feel he will be a superb addition to our squad and that he will complement our game perfectly.

“Everyone here is looking forward to watch Kalvin play and develop even further over the next few years.”

One of the key components of Gareth Southgate’s England squad, over the past few seasons Phillips has reaffirmed his standing as one of the Premier League’s stand-out defensive midfielders.

Armed with a formidable passing range and astute tactical awareness, Phillips combines those key attributes alongside his formidable stamina and infectious appetite for success.

Possessing impressive technique, he is comfortable receiving the ball under pressure and can also break the lines in central areas of play.

With eight seasons’ experience at Elland Road under his belt, Phillips’ career has been one of constant upward trajectory.

Leeds born and bred, Phillips joined the Elland Road club’s Academy as a 14-year-old, impressing as he progressed through the Club’s age groups initially as a more central midfielder.

Having been an unused substitute in a FA Cup third round tie at Sunderland in January 2015, Phillips subsequently made his first-team debut against Wolves in April of that year.

Kalvin then marked his senior home debut by scoring a goal in a 2-1 defeat to Cardiff that same month in 2015.

After subsequently making 10 appearances in the 2015/16 season, Phillips’ Leeds career really took flight in the 2016/17 campaign with Phillips playing 40 times all told.

He then figured 43 times the following campaign as he furthered his football education, and also won the Championship Young Player of the Month award for the first time in October 2017.

However, it was the appointment of Marcelo Bielsa as Leeds manager in the summer of 2018 that proved a transformative moment in Phillips’ career.

The appointment of the visionary former Argentine and Chile boss saw Phillips converted into a more deep lying player in the engine room as well as also, at times, being deployed into central defence.

He made the transition with aplomb, going on to make 46 appearances in Bielsa’s first season in charge at Elland Road, scoring three goals.

Such was his instant impact, Phillips earned a place in the EFL Championship Team of the Year as Leeds finished third in the table, only to be pipped by Derby in the Championship play-off semi-final.

In the COVID-interrupted 2019/20 campaign, Phillips was again a tower of strength, playing 40 games all told and proved a pivotal figure in helping Leeds finally end the Club’s 16-year absence from the topflight as they won promotion.

Eligible to play for England well as Jamaica and the Republic of Ireland through his family heritage, ahead of Leeds’ return to the Premier League, Phillips was then named in the England squad for the first time in August 2020.

He subsequently made his international debut in a Nations League clash with Denmark the following month, in the process becoming only the third player this century to play for the Three Lions before featuring in a top-flight game – following in the footsteps of Jack Butland and Wilfried Zaha.

That same day Phillips was also selected as part of the PFA’s 2019/20 Championship team of the season.

His inaugural season playing in the Premier League saw Phillips further hone his tactical awareness and adaptability as he went from strength to strength, along the way chalking up his 200th appearance for Leeds.

After helping Leeds finish ninth on their return to the topflight, Phillips then further reaffirmed his quality in the summer of 2021 by starting every game as England reached the final of Euro 2020.

The 26-year-old won praise from pundits, fans and the media for a series of combative, dynamic displays as Gareth Southgate’s side reached a first final in 55 years before eventually being beaten on penalties by Italy.

Indeed, such was his impact for the Three Lions, he was voted as voted the 2020-21 BT England men’s player of the year beating Mason Mount and new City team-mate Raheem Sterling to the honour.

Though the 2021/22 season proved a more challenging affair for Leeds, Phillips continued to impress before his campaign was interrupted by a hamstring injury which side-lined him for almost four months, though he returned in the spring to help the Yorkshire side preserve their topflight status.