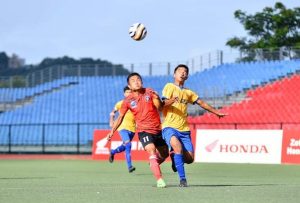 I-Day champions Mizoram Police were unable to find the net against Chawnpui FC in the second fixture of the day, as they fought out a goalless draw.

Police forward Lalfakzuala came close to giving his side the lead twice in the first half but was unable to apply the finishing touches in front of goal.

And later on in the second half, he nearly grabbed an assist after putting through Malsawmfela who was thwarted by the efforts of Chawnpui goalkeeper Lallawmzuala.

Chawnpui FC also enjoyed chances of their own, with their best opportunity coming from substitute Lalliansanga while another substitute Danny Zorammawia was also denied by Police custodian F. Lalmuanawma.