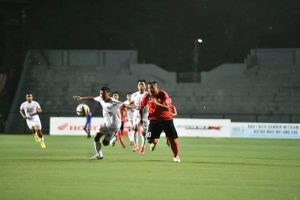 Aizawl FC could not make it four wins in four as they succumbed to a second half goal from Mizoram Police on Thursday.

Veteran marksman Malsawmfela headed in the only goal of the game in the second half from a set piece.

Clear cut chances were at a premium in a even game with Aizawl FC’s controlling possession for majority of the game without any significant breakthrough.

R. Lalthanmawia shone the brightest in their attack and their best chance of the game came in the first half as his cleverly struck freekick went inches wide.

Police now find themselves with 8 points after round 4, one behind the defending champions.