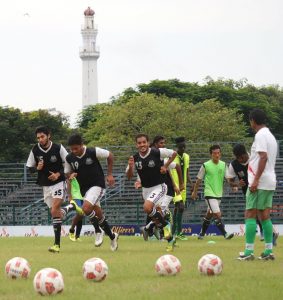 Mohammedan Sporting Club will be playing their fourth match of the ongoing 2016 Calcutta Football League’s Premier Division – A, as they take on George Telegraph SC at the Barasat Municipal Stadium on Wednesday.

While Mohammedan Sporting managed to edge past Bhowanipore FC 1-0 in their last fixture on Saturday, George Telegraph, in contrast, suffered a massive 0-4 defeat at the hands of Mohun Bagan midweek.

Coached by Mridul Banerjee, Mohammedan Sporting began their campaign with a win over Army XI, before suffering a narrow defeat against Tollygunge Agragami. However, The Black Panthers bounced back to the winning ways against Bhowanipore FC and coach Banerjee made it clear that he wants nothing but consistency in performance from the team.

“The previous game against Bhowanipore was a tough one. We played some good football but also missed a lot of chances. We need to learn from every game and improve going forward,” coach Banerjee said.

Currently, fifth in the table with six points from three games, this match is of big significance for Mohammedan Sporting as a win put them right at the top while anything less will hurt their chances of winning the league.

George Telegraph, on the other hand, have had a utterly disappointing campaign so far, as they have only managed to accumulate a solitary point from three games and it’s quite certain that the Georgians, who are already in the relegation zone, will also come hard at Mohammedan Sporting for full points to allow themselves some breathing space in the table.

The Ranjan Bhattacharya led side have had built their team with mostly young players with Babatunde Ayomide Badmus, Bayi Kamo Stephane and John Ampong three foreigners in the side.

“George Telegraph is a good team, even though they have lost their last match by a big margin but they have played some good football in that game as well so we are not taking them lightly and expecting a tough match,” coach Banerjee added.

On the team news front, Mohammedan Sporting has been boosted by the return of wingers Imran Khan and Sheikh Faiaz, who made their way back into the match day squad after missing the last game due to injury.

The match at Barasat Stadium kicks off at 5.30 pm on Wednesday and it will be televised live on ETV News Bangla.